Zachbxt, a well-known blockchain detective, has provided details on a probable rug pull on the Bored Bunny NFT collection, resulting in a $20.7 million loss. The project, according to Zachbxt, is a clear rug pull. His investigation uncovers that the group behind it has a history of fraudulent NFT scams. 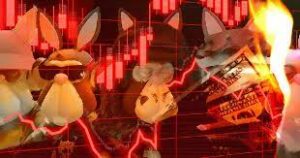 On the other hand, the first two, Ancient Cats Club and Crazy Camel pale in comparison. Amir Adjaouti, and Remy Goma, according to the report, were the main forces behind the endeavor. Insider trading may have tainted the Bored Bunny NFT rug pull, according to rumors.

Oddly enough it promised the benefit of “2x, 5x, or maybe even 10x the value of your investment within a few days” pic.twitter.com/W1i3wTHSuL

In December 2021, the Bored Bunny NFT was introduced, promising a lot. It’s a pfp project, according to the developers, with 4999 NFT and a mint price of 0.4 ETH. Floyd Mayweather, Jake Paul, David Dobrik, DJ Khaled, French Montana, and Chantel Jeffries are among the celebrities who helped promote the project.

The Celeb/Influencer NFTs were purchased by a developer wallet before the actual disclosure, according to Bax, who works at Convex Labs. The team released the Bored Bad Bunny NFT collection after the popularity of the first mint. This was worth 0.4 ETH and contained 1111 NFTs.

The third collection, Bored Mutant Bunny, was released a few days later. It had 3000 NFTs and cost 0.25 ETH. Unlike the previous two, it did not sell out because many people began to doubt the developers’ motives.

The team’s undoing, however, was the fact that the majority of the revenue raised from minting flowed to centralized exchanges like Binance. The team’s past reveals that they are not first-time offenders, as they have previously worked on projects that did not succeed.

Bored Bunny’s official account has denied this, claiming that the lack of response was due to several emails being received. The crew is currently requesting that the project be handed over to a Discord Moderator, however, the project’s floor price on OpenSea has dropped to 0.082 ETH.

Hi Bored Bunny Members⁰
Hope you are all well, I come back to you to give you some news about myself and some explications about the project.

Primarily, the reason of my absence this last month was that I have been through a lot of the emails, messages in private.

According to Nansen data, one out of every three NFT collections becomes a “dead” project because of a lack of trading activity. Following the developer’s dubious practices, the Bored Bunny collection’s trading activity appears to have slowed.

The recent arrest of the masterminds of the Frosties NFT rug heist, on the other hand, has opened up a new frontier for investors seeking to recuperate their losses.

Also read: Ethereum co-founder has quietly supported a DAO that raised $8 million in crypto for Ukraine