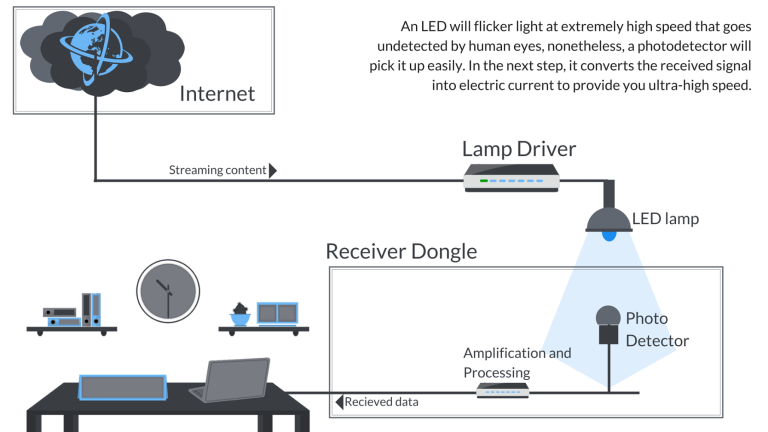 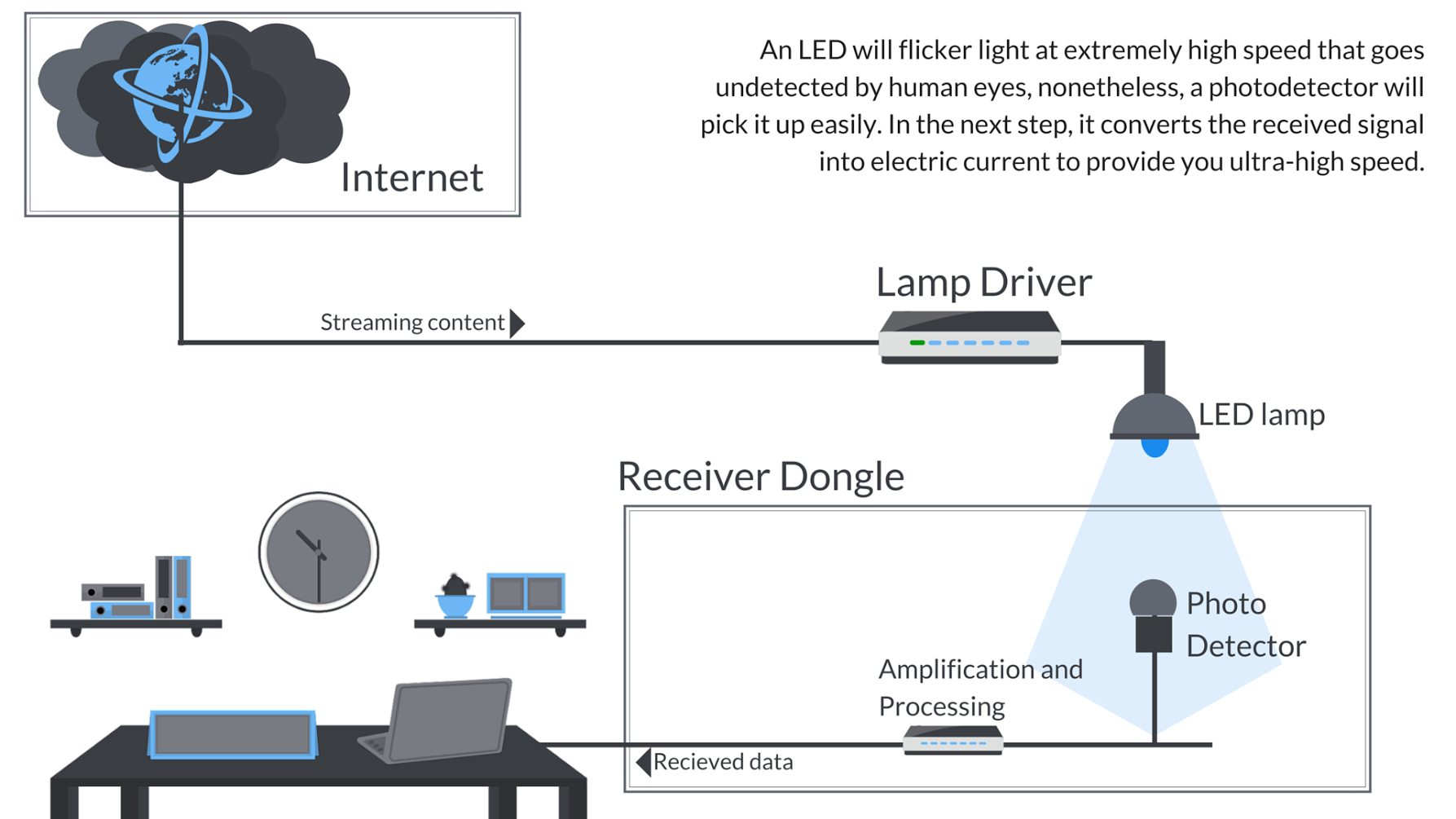 But how? I am happy that you’re curious. Because in the future, your Wi-Fi router will become a thing of the past as it will get replaced by LiFi hotspot. And the LED bulb – of your bedroom, car, TV screen – will not only illuminate but communicate, too.

Not only this, it will provide you suuupppper fast internet speed – 224 Gbps, to be exact. And with that speed, you can download 20 HD movies. Just in one second. Yeah, this much cooler Li-Fi is.

But how LiFi works? Simply put, the LED bulb will blink with such a fast speed that your eyes may not even detect the flickering of the light. The photo-detector, however, can detect it easily to convert these signals to provide you a super-fast data speeds.

Just in case you want to be more technical and also want to know how it’s better than WiFi, you can follow this link. The even more surprising thing is that LiFi is not limited to providing you with the super-fast data speed only.

Where else we will see LiFi getting used? Like you, I was also curious to find the answer. And I used patent analytics for that matter. I collected patents filed in the LiFi technology. It was a huge set of 800+ patents. In the end, I cherry-picked four patents pointing to the futuristic use of LiFi other than providing super-fast data speed.

Enough talks. Let’s explore those avenues where we will see Li-Fi getting implemented. Here we go:

1.   To Increase Robustness in Mobile Payments:
The patent application CN103996116 by Beijing University of Posts and Telecommunications discloses a mobile payment system that utilizes Li-Fi for making payments.

The invention proposes using a photoelectric detector and drive circuit for sending and receiving visible light signals. This payment method is robust, less cumbersome and cheaper than the existing payment systems that use radio frequencies – WiFi, RFID, and Bluetooth – for transferring information.

2.   In Street Lights to Provide high-speed Data Everywhere
The patent application CN104022824 by Chuzhou Hui-Technology discloses a street lamp utilizing LEDs to both illuminate and communicate. Do you know what this mean? This means that in the future, in all public places – railway station, hospitals, airports, etc. – you can enjoy LiFi.

3.   For Providing Data Services inside an Aircraft Cabin
Patent application 20110069958 filed by Airbus discloses a Li-Fi enabled data communication system inside an aircraft cabin. Prof. Haas, the father of LiFi, is one among the three inventors of this patent.

Use of radio frequency to communicate inside an aircraft cabin creates multiple problems viz. it’s inflexible, it leads to additional design changes, and also generated electromagnetic interferences. Use of LiFi solves all of these problems.

So the in-flight entertainment is all set to get revolutionized.

4.   In Traffic Signals to Reduce Accidents
The patent application CN104167101A by the Xi’an University of Art, China discloses a wireless optical communication between headlight of a vehicle and traffic lights.

A traffic light, as per the invention, will form a QR Code to communicate traffic information to vehicles. Thus, in the future, the headlight of your car will communicate with the traffic lights to find which road it should avoid averting traffic congestion.

In short, it will help avoid traffic congestion, will improve active safety precaution of vehicles and reduce traffic accidents.

Isn’t it a kind of cool thing that a small LED bulb is so much useful? What do you think? Chime in the comment box below and do let me know. 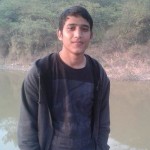