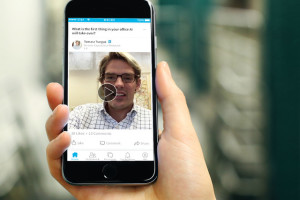 LinkedIn is taking on its fellow social networks by introducing videos on its platform. But obviously LinkedIn wont offer disappearing videos that you can doodle on, and add emojis to. In fact, general users won’t get a chance to record clips altogether. It will keep things professional as always!

LinkedIn’s videos would, however, be restricted only to select ‘influencers’ on its platform. LinkedIn has reached out to influencers to share their thoughts on trending professional topics and news through video, Jonathan (Jasper) Sherman-Presser, senior product manager at LinkedIn, announced in a blog post.

LinkedIn currently has over 500 Influencers, including Bill Gates, Richard Branson, Arianna Huffington, and Narendra Modi, meaning content shouldn’t be hard to come by.

“Today your LinkedIn Feed will come to life in a whole new way with the introduction of 30-second videos from LinkedIn Influencers,” Sherman-Presser said in the post.

If you are not one of the company’s Influencers, you won’t be able to use the new app. Don’t worry about that though as majority of people are with you on this!