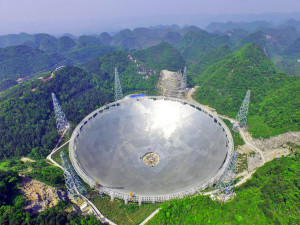 China has successfully finished the installation of the world’s largest radio telescope with the final panel fitted on the giant dish.

The last of 4,450 panels was put in place at the site in Guizhou province on July 3 and signals a countdown to its operation launch in September, reports the People’s Daily Online.

Once fully working, the Five Hundred Metre Aperture Spherical Telescope, also known as FAST, aims to search for signals to understand the origin of the universe and also boost the global hunt for extra-terrestrial life.

The telescope has a diameter of 1,640 feet and is roughly the size of 30 football fields.

The new telescope is set to be involved in the search for extra-terrestrial life. With its sensitive telescope, it can detect weaker radio signals. 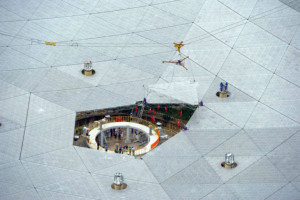 It is also due to be used to study the Milky Way in more detail and look for the first shining stars. The ‘Five-hundred-meter Aperture Spherical Telescope’ or ‘FAST’ cost a whopping 1.2 billion yuan ($180 million) to build. If everything goes to plan, the telescope will launch in September.

“The telescope is of great significance for humans to explore the universe and extraterrestrial civilizations. I hope scientists can make epoch-making discoveries,” Liu Cixin, a renowned science fiction writer and winner of the 2015 Hugo Award for Best Novel, was quoted by the agency as saying.

The telescope would undergo further adjustment during the initial 2-3 years following its completion during which Chinese scientists would use it for early-stage research. Following that, it would be open to scientists worldwide, Director of the NAO Radio Astronomy Technology Laboratory Peng Bo said.

Engineer Zhu Boqin worked on the site selection 20 years ago. He recalled that after more than two hours trudging on the rugged mountain road, about 150 kilometers south of the provincial capital Guiyang, he was impressed by the sight of a large, round depression embraced by verdant hills.

It was home to 65 people from 12 families in a closed-off world called “Green Water Village.” Lacking electricity, the villagers had a clear view of the starlit sky at night.