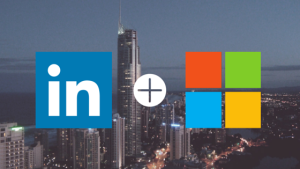 LinkedIn reported second-quarter earnings after the market close Thursday that soundly beat on the top and bottom lines. The provider of a social network for professionals reported revenue of $933 million, up 31% from Q2 2015 and beating the consensus estimate of $898 million. Still, it marked its slowest growth in at least more than four years.

LinkedIn credited sponsored content with bolstering its growth in marketing solutions, which brought in $181 million in the quarter.

The network also reported 450 million members for the second quarter. That’s up from 433 million in April and a 18 percent increase from the year prior.

LinkedIn did not share outlook on the rest of 2016 due to the pending merger. The deal, the largest for Microsoft and in recent history of tech company mergers, still needs to gain regulatory approval.

“We believe joining forces with Microsoft enables us to further accelerate and scale our ability to deliver value and create economic opportunity for every member of the global workforce,” Weiner said.

Microsoft said in June it is paying $196 per share in an all-cash deal that is expected to close some time this year. The price Microsoft is offering is a validation of the Mountain View, Calif.-based company’s growth prospects, after LinkedIn’s shares tanked by more than 40% in February.