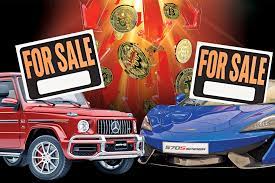 The fall of cryptocurrency exchange FTX has been witnessed in some subsidiary Industries as well such as automobile industries in which the crypt owners like Crypto bros who have been blistering and using their expensive cars as the symbol of luxury and rich life with the investments into the cryptocurrency are selling their expansive cars like Mercedes and McLaren are offloading them at some reseller platforms to recover from the losses they witnessed with the investment into FTX Platinum.

Who are Crypto Bros?

The duo Brett Salyer and Markus Riggs who run one famous podcast Crypto Bros seem to be running empty after the crash of the FTX platform. They are selling their fancy cars after the cryptocurrency market collapsed and a huge amount of cryptocurrency transactions deprecated the value of cryptocurrency Bitcoin. with this scenario, they are seen to be witnessing completely empty pockets, and to overcome this issues they are offering their expensive cars on reseller platforms.

The luxurious Cars owned by these Crypto Bros are available on the resale sites AutoTrader since last week. As the Crypto market is facing the worst time these premium cars are not witnessing any premium prices at this moment. This can be evaluated from the fact that the Mercedes Benz G Wagon which was once considered a symbol of a new money badge from the cryptocurrency investment is now sold on the reseller website at $200,000. The same car models were once Sold by some other sellers at $300,000 when the cryptocurrency market was at its peak.

Along with the Mercedes Benz G-Wagon, some other luxurious car models like Lamborghini urus and McLaren Spiders have also witnessed huge dips in their prices on this reseller platform in recent times, after the Fall of the cryptocurrency market.

The fall of the cryptocurrency exchange platform FTX has wiped out approximately $2 billion of retail investor’s and crypto customer’s funds in the last month after the FTX Platform collapsed and filed for bankruptcy protection proceedings in the US.

As per the tweet of CarDealershipGuy the Mercedes G-Wagon which was sold for $80,000 last year is now sold at $187,000 in the action at the reseller platform. CarDealershipGuy Mentioned that this is considered to be a 30% drop in the price of these cars in just 12 months.

Along with that a similar Mercedes model car, the G63 AMG which was costing $240,000 last year in the auction is valued at $179,000 in the present Times. Along with AutoTrader, one other car-ad aggregator, AutoTempest is filled with lots of luxury car sales offers in recent times.