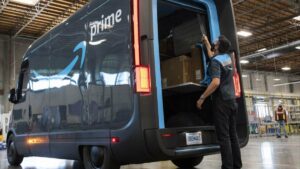 Amazon.com Inc went on to make a notable announcement this week, on July 21. It stated how it is set to initiate rolling out a bunch of electric delivery vans it made in partnership with Rivian Automotive earlier. The founder of Amazon, Jeff Bezos made the announcement regarding this partnership at Washington, D.C.’s National Press Club in September 2019 when he was still the chief executive.

On stage, Bezos made the announcement that the e-commerce giant had bought electric vehicles, about 100,000 in number from the automobile company Rivian. Further, he noted this collaboration was an extension of its pioneering goal to attain net-zero carbon emissions throughout its business in the next twenty years.

In October the following year, the retail giant introduced a version of this vehicle, testing them next in a range of US cities last year. Currently, Amazon stated how it would use these vans to carry out deliveries in several cities such as Seattle, San Diego, Dallas, Tennessee, Nashville, etc. Further, it added how by 2022 end, it is looking at ‘thousands’ of these vehicles in over hundred cities. This would finally bring Amazon closer to its aims of having 100,000 such cars functioning by 2030.

Jassy emphasised on the need of consistent ‘action and innovations’ to combat the impact of climate change, and how the company is collaborating with other who have similar views to control these effects. He added how Rivian had emerged as a noteworthy ‘partner’ in this plan, and is thrilled to view the results of the partnership.

Similarly, chief executive of the automobile startup, R.J. Scaringe stated how the establishment of such a vehicle is a breakthrough in the efforts to control the harmful effects of climate change.

Owing to Amazon’s giant delivery network, with majority of its operations being in house, it heavily depends on several contracted delivery firms. In turn,this  leads to the extensive burning of fossil fuels through the utilisation of its signature Amazon delivery vans.

On the other hand, this rollout from the EV startup witnessed a range of hurdles owing to a range of problems. Towards the end of 2021, drivers responsible for its testing cited problems with the delivery vans’ batteries. About two months ago, the startup filed a lawsuit against the seat dealer over delay worries.

Additionally, Rivian fought other issues including cutting its 2022 production forecast by 50%, which included the vehicles for this venture. However, restated the number towards the beginning of July 2022. Moreover, Amazon assured that it would continue supporting the automobile company for the project.