Apple to find a way to reach $1 trillion in revenue by 2030 With a systematic plan, it can earn $1T in revenue in the next 8 years 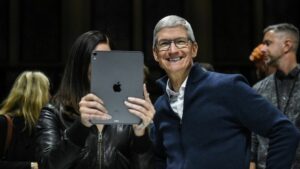 Apple could expectedly hit the trillion dollar-mark in annual revenue by the year 2030. According New York University professor, Scott Galloway, Apple could reach the milestone with proper expansions of its fields. In the way of adequate acquisitions and investment in its businesses, Apple can work towards this goal. Such expansions in the fields of health, banking, search and its previously planned ‘Apple car‘ would aid the company in reaching its goal.

Despite falling behind other companies in terms of revenue, Apple comes up as a legend in the stock market. It became the first publicly-traded tech company in the world to achieve the $3 trillion mark in market capitalisation. Apple had already reached more than 33% of its milestone by earning $366 billion in revenue. However, it still fell behind Amazon and Walmart, which made $470 billion and $559 billion respectively.

Apple, with its uniqueness, can invest in the ecosystem it specialises in and where no other firm has a chance. No other firm has a network is as perfectly linked as Apple is. This can aid it in stealing markets from this other firms. The NYU professor suggests that as Apple needs funds to expand, they should use the available $126 billion as investment into businesses. Additionally, they should use their stock as a form of currency. 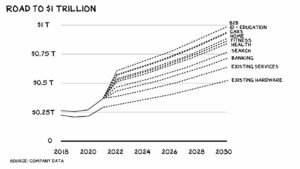 The pathway to its goal
Source: Apple insider

The road to revenue:

Scott Galloway recommends the use of Apple Pay and Apple Card, and its capital to invest further in consumer banking. Offering its customers, a consumer account through ‘Apple Cash,’ along with other features can contribute to its expansion. In his opinion, it could raise a $75 billion business by 2030, owing to the $35 billion manage by banks in consumer banking.

Galloway also suggests search as a viable path to expansion for the existence of Apple’s ‘Safari,’ a part of its own network. However, Apple could initially lose billions because of the Safari default search deal, which involved Google. Clearly, Apple will not be able to generate the same revenue from ads as much as Google, but it is expected to manage a $5o billion in revenue.

In the field of acquisition, Galloway suggests that Apple acquire the exercise bike-selling company, Peloton. Its current value is conveniently reduced to $10 billion and generates a revenue of $5 billion. He expects the acquisition to be a success for with Apple’s backing, Peloton could become a $20 billion business by 2030. Another $20 billion could be earned by accelerating its home automation system, which is currently a $80 billion market.

Taking future project into account, The rumoured ‘Apple Car’ could generate the initial “$250 billion+ transfer” as a significant shareholder value from Tesla Inc. With the growth of the electric vehicle market and Tesla’s lead in it, it could possibly generate a $50 billion in revenue. Along with it, expansion into the world of educational services could add on another $10 billion.

The upcoming “Tap to Pay” which would allow payments on phones, could also act as a significant expansion field. Finally, an investment of $10 billion on data centres could end their dependence on Google and AWS, generating roughly another $50 billion.

There is a fair chance that the plan proposed by professor Galloway may not work owing to Apple complex discipline. However, it can definitely act as a distinct blueprint on which Apple can plan further.