South Korean car brand Genesis gets its own electric vehicle charging station designed by Architecture studio Morphosis. It is featuring wing-like canopies in a series of states that are complete at various outdoor locations in Seoul and Gyeonggi-do. Both locations are densely populated metropolitan areas in South Korea. 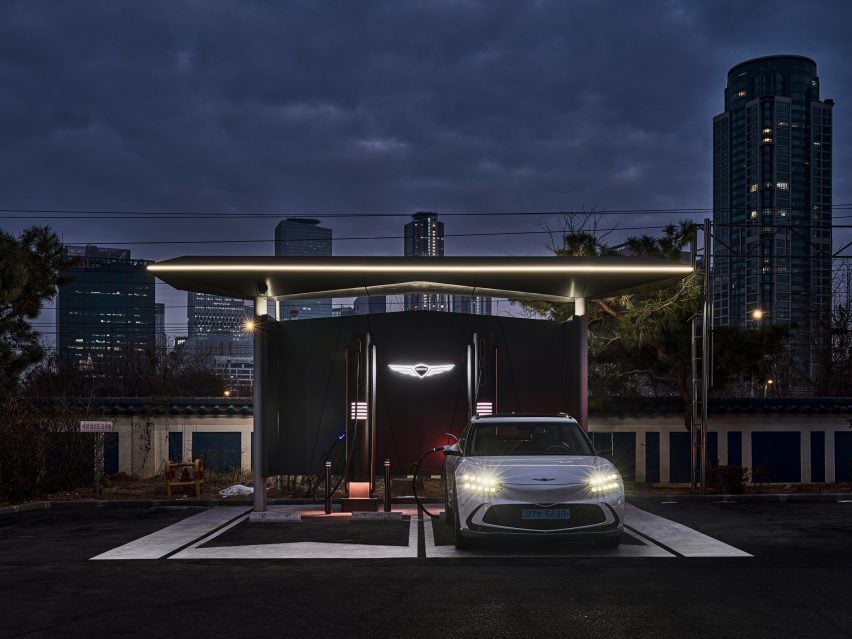 As automakers develop electric vehicles, setting up charging stations is also a priority, especially for luxury sedans. Morphosis designed the Genesis charging station as a part of the luxury vehicle division of Hyundai Motor Group. Having a designed charging station was a given considering Genesis is a flagship vehicle. Currently, various versions of Genesis flagship showrooms have various interior versions of the vehicle. Each design is unique and made especially for the luxury brand with the logo and other unique features.

Genesis has a distinctive logo, a winged emblem with a shield at its center. This will be also present on the exterior of the electric vehicle charging stations. The wings are meant to be “protective canopies” where the wings are made with a steel superstructure and aluminum panels. Each canopy has a continuous LED lightning at the edge, to make the stations identifiable even from afar. In addition to this, the stations are planned to have changing colors on their LEDs representing a plugin in the vehicle’s charging level.

The studio said, “The winged form of the canopy is instantly recognizable within the urban environment, with a lightness and elegance that evokes the distinctive Genesis wing emblem and Genesis’ core design identity of ‘athletic elegance,'”

Every station will be able to charge three vehicles at a time. Being a luxury car, it is expected to suffice. While some chargers take 20 minutes to charge to full capacity, others can take a bit longer. US firm Morphosis was founded in 1972 that has done various such architecture projects internationally. These include a 15-story mixed-use development in Los Angles that has a plant-covered glass tower and a striking asymmetrical supertall skyscraper in Shenzhen, China.

Other creative designs by them include the Bloomberg center in NYC which was completed in 2017. It is the first building at the new Cornell Tech campus on New York’s Roosevelt Island. It was dubbed “one of the most environmentally-friendly buildings in the world” by the university. The aspirations for the building were to have LEED Platinum stats and reach Net-Zero. It was designed with a range of strategies including solar power, geothermal ground source heat pumps, and a dynamic energy-efficient facade. The overalls balance opaqueness and transparency, maximizing the building insulation.