Baidu and Pony.ai are operating first self-driving cars without drivers in Beijing

China’s Baidu and Pony.ai are operating the first autonomous vehicles in Beijing without any safety drivers. Technically a driver is not required for the vehicle, a supervisor will be present during the rides somewhere or the other within the vehicle. Furthermore, the companies can’t operate on every street in the city of Beijing, it is limited to a 60 square kilometers area in Yizhuang, Beijing. 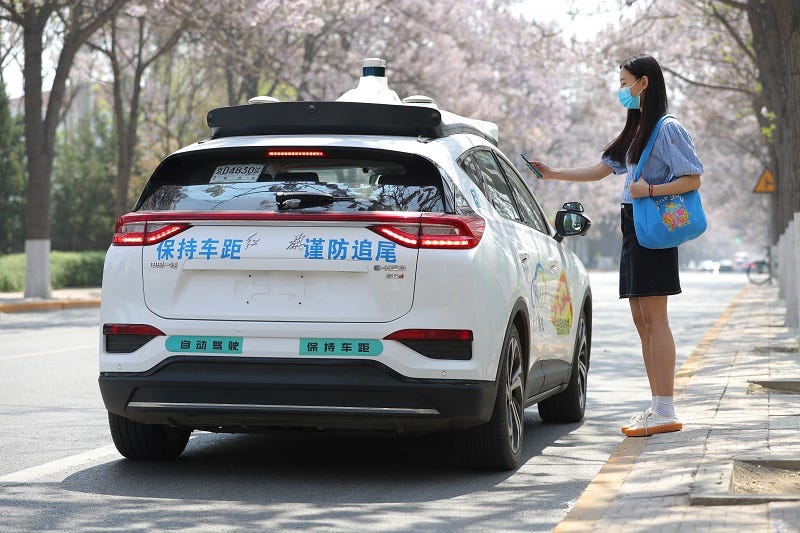 While Baidu can deploy just 10 autonomous vehicles in the area, CNBC says Pony.ai can only operate four. Both companies have plans to expand the number of vehicles on the road (with Baidu shooting for 30), but it’s unclear how soon that will happen. Beijing authorities started allowing Baidu and Pony.ai to charge for their robotaxi services in the Yizhuang area of Beijing last November, although the city initially required both services to have a safety driver behind the wheel. According to TechCrunch, riders can hail either robotaxi service through Baidu’s Apollo Go app from 10 AM to 4 PM or with Pony.ai’s PonyPilot Plus app from 9 AM to 5 PM.

Last week, the Toyota-backed Pony.ai became the first autonomous car company to win a taxi license in China. It received permission to operate 100 vehicles in Nansha, Guangzhou, and says a safety driver will be on board for a short period of time. Pony.ai has been approved to test its autonomous vehicles without safety drivers in three California cities as well, but this permit was suspended after one of its cars collided with a center divider. Baidu, the company behind the massive Chinese search engine of the same name, was also granted approval to test its vehicles without safety drivers in Sunnyvale, California. It joins a number of other autonomous vehicle companies, like Waymo and Cruise, that can operate fully driverless vehicles on the streets of California.

Pony.ai said earlier that riders can hail and pay for rides from the company’s app between 8:30 AM to 10:30 PM, and that its fares will align with the “standard taxi pricing” in Guangzhou. The autonomous vehicles will also have a driver present in the car for safety purposes, but plans to remove them over a “short to intermediate time frame.” Pony.ai says it has completed over 700,000 trips since April 2022, and almost 80 percent of riders are repeat customers. In November last year, the Chinese startup gained approval — but not a license — to operate 67 vehicles in Beijing. It’s also been working to establish a presence in the US, a prospect set back after one of its autonomous vehicles crashed in California, resulting in its permit getting suspended. The company had been testing its vehicles in the state since 2017 and received a permit to operate its vehicles without drivers last year.