Arun Prabhu an architect studying in Chennai has successfully built a high tech house on top of an auto rickshaw. This house is equipped with all modern amenities which the residents require on a daily basis. This can be a one stop solution to solve most of the housing problems in India since it’s capable of providing a comfortable stay for two adults.

This idea struck to Arun while studying Architecture. During his research on slum housing he notices that there was a lot of poor space management. The slum dwellers were not able to utilize the space properly. It was also very costly for them as they would have to shell out around 4 lakh for a house. This house was not equipped with basic necessities and most of the time would not even have a toilet.

Inspired with this Arun, who completed his Bachelor of Architecture at MARG Institute of Design and Architecture Swarnabhoomi (MIDAS), developed ‘Solo:01’. Arun said, “I was researching slum housing in Chennai and Mumbai, and realised that these small spaces that could be improved by instituting a proper design, to create toilets, bedrooms, etc. and make the house more habitable.” While speaking to the The Better India.

This entire project costed Arun approximately 1 lakh rupees. This 36 sq feet portable house on wheels is sufficient for two adults to stay and carry on their daily activities comfortably. He said the main concept is being built by keeping in mind the lifestyle of the nomads such as an artist, a solo person, a vendor, a traveler or even the homeless people. 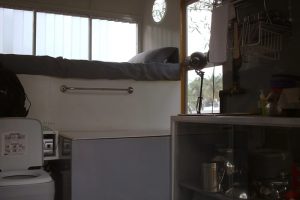 This house is equipped with a kitchen, a bathtub, a toilet, foyer and living area on one level. The sleeping space and workspace is designed at 3.5 ft of height. This house is also very sustainable to manage with a 600 W power solar panel installed on the roof. Also 250 liter water tank has been installed on the terrace to take care of the water necessities.

Including all this, the terrace also comes with a lounge space with space. To discard further doubts Arun said that with all these features incorporated on top of a rickshaw many people assume that this structure will be quite heavy. But he said that reality is far from it, in fact the weight is distribute equally over all the structure.

Arun began constructing this house in August 2019 and it took him five months to complete it. This house is completely made out of scrap materials. These scrap materials were belonging to old bus bodies and demolished structures. Since this house is portable, Arun says it makes it easier to carry it and dismantle it. Arun says it can be really useful to relocate people during natural calamities or in case of any unfortunate event.

This commendable idea of Arun Prabhu became so popular that businessman Anand Mahindra also tweeted praising the idea and the architect behind it. He further added that if Arun will be able to design a similar structure on top a Bolero pick up truck. This tweet gained massive response from the tweeter users. Many were able to share Arun’s contact details with Mr Anand Mahindra. None the less, this idea is commendable as it combines sustainability and space saving using nothing but recycled materials and is also budget friendly.

There are high chances that this idea can be further developed for improvisation and implementation.