Coinbase’s international expansion plan: seeks every cryptocurrency on its exchange 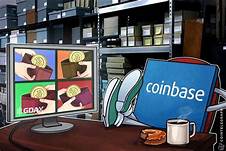 Coinbase, one of the world’s most prominent cryptocurrency trading platforms, is set to gear up its new international expansion plan. Brian Armstrong, the CEO of coinbase, mentioned in a statement in June that the exchange is planning to list every cryptocurrency where it’s legally permissible. The expansion strategy came after Armstrong expressed his concern over the increasing competition, saying that the rapid expansion of the crypto-economy is posing challenges for future growth prospects.

Brian also added that the exchange wants no coin to get special treatment, they don’t offer an opinion on the worth of each asset, except their listing standards (for safety/legality) and that they believe in the free markets and the crypto-economy that consumers should have a choice.

Established in 2012, coinbase has been a central hub for all cryptocurrency investors. Since then, it has rapidly been expanding in the world of development and technology initiatives.

The exchange was valued at around 81 billion dollars when it went public in April. And it has extensively been investing in its technological development to keep ahead of its business rivals.

As per the reports, the company spent around $184 million on technology and development followed by $118 million in sales and marketing.

Also read: everything you need to know about the hot cryptocurrency terra

Plans to gain a strong international foothold in the market

The exchange has greatly picked up the pace in the past few years. In 2017, the exchange just offered currencies: bitcoin, ethereum, litecoin, and bitcoin cash. At the time, a Coinbase listing was a big occasion, in a way, any new coin coming on the stock was more like an official legitimization of the currency. But now, the exchange seems to have a different theory for its future.

The exchange now lists 63 cryptocurrencies. From stable coins like tether (USDT) to well-known coins like cardano (ADA) and even more obscure coins like NKN (NKN), which ranks 166th on CoinMarketCap.

Coinbase revealed in January that it considered 44 coins to be added. Some of them have already been introduced including ankr (ANKR), curve (CRV) and skale (SKL). The exchange added to its lists just three days ago other tokens, such as barnbridge (BOND), livepeer (LPT) and quant (QNT).

But it still has a long way to go if it really intends to include every crypto-currency with tens of thousands more assets there.

Coinbase revealed before its debut on its stock exchange that it will report $730 million to $800 million for its first-quarter profit. This will be over two times as much as the corporation earned in 2020 according to Bloomberg.

In the last quarter, its expansion strategy worked. Coinbase produced profits of $771 million in the first quarter, 20 times in the previous year.