Companies of the future – Mu Sigma – The masters of data analytics

Data analytics firm Mu Sigma has managed to cross USD 100 million in revenues in less than 7 years, a milestone a number of large companies took at least 10 years to cross. The company has managed to generate funding of over 200 million USD and has clients in almost every continent. Mu Sigma is being called ‘The next Infosys’ by a number of analysts. 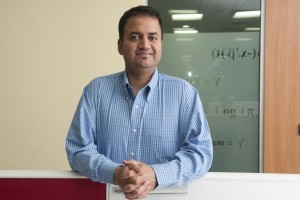 Mu Sigma was started by Dhiraj Rajaram in 2004 when words such as big data and data analytics we still unheard of in the technology industry. Rajaram sensed the opportunity to analyze the large amount of data created by adoption of software while working with Booz Allen Hamilton in the US as a strategic consultant. “The amount of data generated in businesses was soaring with the adoption of software, but there was a dearth of talent to analyze it. I took the problem to my employers and to other people but nobody was willing to listen to a 28-year-old,” says Rajaram

For the first nine months after starting their company, there were no clients. Around mid 2005, Microsoft agreed to consider them for a small project on analyzing consumer behavior. The firm never looked back ever since. Today, Mu Sigma counts more than 140 clients from among Fortune 500 companies.

One of the things that worked very well for the firm was playing in many sectors from early days – from financial services to healthcare- which helped it gain scale. The other thing that has worked very well for the firm is the way in which they managed hiring. Rajaram, following the footsteps of Jobs believes in surrounding himself with A team. Just one in sixteen people interviewed is hired and a lot more are rejected before getting to that stage. The company then puts these hired through a three month program called the Mu Sigma University that teaches the basics of consulting, applied math, data modeling, statistics and economics. The company today has about 3000 employees.

The firm has done very well so far but might be looking at a bumpy road ahead. With the increased demand of data analytics professionals, talent retention has become a problem. As a long term fix to the problem, the company has distributed 15% of its equity among senior employees. The other challenge the company faces is growing competition. Its biggest competitors Fractal Analytics and AbsolutData are catching up other than the big IT companies which are fast entering the analytics space.

Investors and analysts have their confidence firmly placed with the analytics firm. Charles King, principal analyst for Pund-IT says “Mu Sigma’s analytics services offer a couple of attractive propositions.” “First and foremost, the company helps customers get going with analytics without a sizable upfront investment,” King says. “That’s particularly important for companies with limited means and for those uncertain about the long-term value of and payback from deploying standalone analytics solutions. In addition, even if companies have decided to invest in analytics, the current shortage of data scientists makes it difficult or even impossible for many projects to proceed.”