Electronic robot skin out-senses the real thing The skin consists of arrays of zinc oxide nanorods, encased in a layer of polyimide 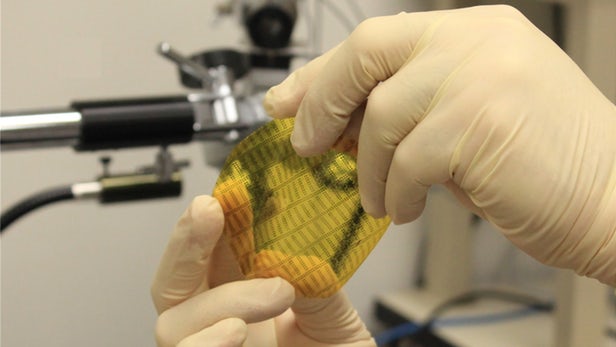 We’ve already heard about flexible electronic “skins” that could give robots or prosthetic limbs a human-like sense of touch. Now, however, scientists from the University of Texas at Arlington are claiming to have developed a skin that’s even more touch-sensitive than our own.

Created by a team led by Prof. Zeynep Çelik-Butler, the “smart skin” incorporates millions of tiny flexible sensors made from 0.2-micron-thick zinc oxide nanorods (by comparison, human hairs are approximately 40 to 50 microns in diameter). Each of these sensors is self-powered, requiring no external voltage.

The whole lot of them are encased in an elastic layer of chemical- and moisture-resistant polyimide, resulting in a tough, flexible and waterproof skin. When even a tiny amount of pressure is applied to the polyimide, the nanorod sensors in that area detect that pressure by bending.

As a result, the skin is remarkably sensitive to variations in surfaces that it touches – it can also detect changes in temperature. The material could ultimately be applied to robotic grippers, the fingers of prosthetic arms, or even just handheld sensing devices.

“These sensors are highly sensitive and if they were brushed over a partial fingerprint, the technology could help identify who that person is,” says Çelik-Butler. “Imagine people being able to ascertain a person’s identity with this hairy robot, as my students call it.”