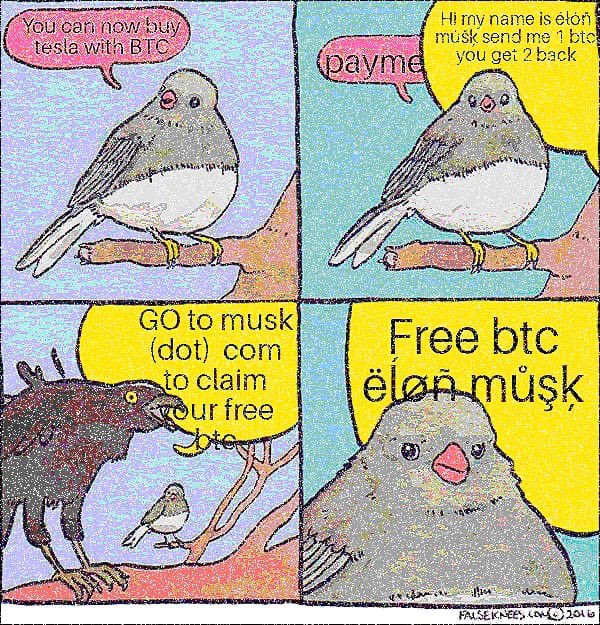 Recently, Billy Markus, the founder of Dogecoin, tweeted, “Twitter is essentially a big advertising board mixed with complaining.” To this, Elon Musk replied, “plus crypto scams, haha.” And then Billy shared a hilarious meme that won’t do justice if I talk about it. So here it is, describing the crypto scams on Twitter. It shows how the scammers actually try to get money out of people. Therefore, if you see something like this happening in the comments, then do report it.

After the Tweet, people started replying on Twitter. Some were sharing their experiences about how they got scammed, while others were making fun of the tweets. People started to point out that Elon Musk might be talking about Shiba Inu and Floki by this tweet about crypto scams. Many say that Floki is surely a scam, while others say the same about Shiba Inu. This could be because recently, when Elon was asked if he is holding any Shiba Inu, he simply replied, “Nope.”

Then there are another group of people who are saying that Elon and Dogecoin are a joke themselves. While all other tokens are pumping hard, Dogecoin is not doing much. But most people are talking against SHIB and Floki while their communities are trying to defend them over their utility and the supposed use cases they have, like NFTs and more. It seems like most people think if someone owns Dogecoin, they can own Shiba Inu and vice versa.

What do I think Elon meant?

While most people were making this about Shiba Inu, Floki, and Dogecoin, we should note that this is not probably what Elon meant. The meme clearly shows what he is talking about. The scams where people are asked to send something so they can get double the amount in return are what Elon is targeting. There are hundreds of accounts that are active in his name, and these scammers often target people on Twitter. This is the reason for the tweet.

What are your thoughts on the hundreds if not thousands of crypto scams on Twitter? And do you agree with Billy’s statement that “Twitter is essentially a big advertising board mixed with complaining”? Let us know in the comments below. Also, if you found our content informative, do like and share it with your friends.

Also Read: An Ethereum ETF could be the next step, says a former SEC official.