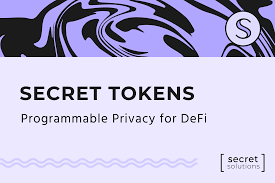 Everything You Need to Know About Secret Network (SCRT)

Cryptocurrencies, such as Bitcoin, are well-known for providing secure transactions with a level of transparency that centralized currency systems do not provide.

However, because such transactions are visible to anybody, transparency can be a double-edged sword. One significant concern with blockchain is that not all data is intended to be publicly shared. Most people, for example, do not want to reveal their financial information.

In this post, we’ll look at how Secret Network wants to provide users with the best of both worlds: the robust security of blockchain technology, as well as transparency options that allow you to keep your data totally private.

What Exactly Is the Secret Network?
Secret Network is a blockchain technology that allows for encrypted smart contracts while also protecting data privacy. Encrypting inputs and outputs at the protocol level improves on typical smart contracts. Secret Network protects the privacy of any sensitive data acquired and kept in decentralized apps (DApps).

Because blockchain transactions are public, there is no guarantee of privacy in the blockchain ecosystem. Even if the address initiating a transaction is anonymous, the transaction’s metadata can be analyzed and linked to specific entities. There have already been rumors of government agencies developing bitcoin tracing tools based on this concept, which is an issue in a world when digital security and data privacy are hot topics.

Blockchain technology, decentralized finance (DeFi) applications, platforms, and tokens are poised to disrupt a variety of businesses that handle sensitive data in previously unimaginable ways. In truth, DeFi Decentralized Finance (DeFi) applies the blockchain’s decentralized principle to the world of finance. Build… is poised to transform the financial environment by enabling digital payments without the approval of a centralized authority.

Smart contracts are critical to DeFi’s success. These are self-executing pieces of code that run on a blockchain and can be used to create DApps. They are, however, usually made public by default. This means that all data used and gathered by DApps on a public blockchain is accessible to the general public.

The Secret Network solution is built on encryption from the ground up. Tor Bair, the Secret Foundation’s founder, refers to it as “programmable privacy,” and it goes beyond the transactional privacy provided by privacy-centric coins such as Monero. It uses a network of computers known as “secret nodes” to securely compute smart contracts developed on the platform. To provide safe, private computation, the nodes use a trusted execution environment (TEE). TEE technology is already being utilized to securely handle data on a variety of devices, including smartphones and gaming consoles, ensuring data privacy by default. It is the method by which cellphones handle sensitive biometric data, such as your fingerprints.

Secret Network is attempting to build towards a future that welcomes interoperability with other blockchains, with the ENG-to-SCRT token swap finishing in January 2021, effectively closing the book on the old Enigma project. A lack of cross-chain compatibility may limit Secret Network’s appeal, preventing it from becoming as broad or beneficial as the community creators hope.

Secret Network is also making a significant push for decentralized finance with its Secret DeFi program, and in February 2021, it will launch a SecretSwap decentralized exchange. According to the Secret Network FAQ, “part of our objective has always been giving privacy to every blockchain,” and another potential endeavor on the roadmap is Cosmos inter-blockchain communication and interoperability.

Aside from that, Secret Network looks to be focused on attracting additional developers to create their dApps on the blockchain, hence showcasing new use cases. It isn’t the only blockchain with privacy-focused smart contracts (Oasis Network is another), and there are other potential answers to the quandary of handling sensitive data on the blockchain, such as safe multi-party computation. It remains to be seen whether Secret Network’s solution will ultimately outperform others now on the market or on the horizon.

Secret Network’s smart contracts are referred to as “secret contracts” since they are built with encryption and data privacy in mind by default. Secret contracts, which are written in the Rust programming language, allow DApps to use encrypted data without ever exposing it – even to the secret nodes that execute the work required to run the applications. Users have complete discretion over what they share and with whom they share it. They have the option of creating “viewing keys,” which allow third parties to examine their sensitive data.

What Is the Purpose of the Secret Network?

The combination of secret contracts with TEE enables novel use cases not available on other blockchains. The Private Foundation has already proposed a variety of potential use cases for the Secret Network, including secret DeFi apps, non-fungible tokens (NFTs), crypto auctions, exchanges, games, and more. Here are two relevant use scenarios.

SCRT Secret Token (SCRT) is the Secret Network’s native coin. It works in the same way as Monero (XMR), Dash (DASH), and other privacy coins in that the recipient, balance, and transaction amount can all be encrypted. Secret Network’s configurable privacy offers anonymity and confidentiality.

If SCRT holders want to show their balance to third parties, they must generate a viewing key.

SCRT, in addition to serving as a currency, is also used to pay for fees associated with using Secret Network apps and for on-chain administration. Users must “stake” SCRT tokens in order to become hidden nodes and contribute to the network’s security. Tokens are also necessary to participate in network governance and to vote on ideas that determine the network’s future.

What makes Secret Network so unique?

There’s a lot to appreciate about blockchains in terms of immutability and transparency, but that kind of openness limits the type of data that many blockchains can safely handle—particularly top-secret material that people or companies wouldn’t want to be seen by just anybody.

Secret Network intends to fill that need by adding a layer of secrecy and security while retaining the benefits of blockchain technology—the best of both worlds, in theory. While it is not the only startup aiming to fill that hole, it is a notion that has the potential to shape the future of some decentralized apps (dApps), particularly in the field of decentralized finance (DeFi).

SCRT has a circulating supply as of November 2021.

The quantity of cryptocurrencies or tokens that are publicly available and circulating in the crypto… of 150 million tokens is referred to as the circulating supply.

It has an amazing market cap for a new coin.
A cryptocurrency’s market capitalization (or market cap) is a measure of its market value. In other terms, it’s worth nearly $1.4 billion.

Sienna (SIENNA) is yet another Secret Network token. It is the native token of the Sienna platform, which is a DeFi exchange and protocol that enables low-fee private trading, lending, and borrowing. SIENNA tokens can be used as a store of wealth and to vote on suggestions for the Sienna platform’s future.

Sienna also has an ERC20 variant, wrapped SIENNA (wSIENNA), that resides on Ethereum and is interoperable with the Secret Network’s Ethereum bridge.

Users can lock up their SIENNA tokens on the bridge and mint wSIENNA, making it easier to spend their tokens in Ethereum’s ecosystem. If you want to reclaim your SIENNA, simply return the wSIENNA to the bridge, and Secret Network will return the tokens to you.

SIENNA tokens have a total supply limit of 10 million. It is a very recent coin, having been produced in September 2021. Its market capitalization is expected to reach $42 million by November 2021.

What Impact Does This Have on Investors?

Blockchain technology has a wide range of possible applications in a variety of areas, including finance, healthcare, machine learning, and others. However, without anonymity, none of these possible use cases, particularly in finance, can ever take off – and this is where Secret Network comes in.

The Secret Foundation’s mission is to bring anonymity to every blockchain by utilizing off-chain bridges that allow assets to be transferred across networks. Secret Network announced the introduction of the Secret Ethereum Bridge in December 2020, allowing the movement of assets between Ethereum and Secret Network. There are also plans to build a slew of new bridges in the future.

The project is making significant progress in DeFi. In February 2021, it launched SecretSwap, a decentralized exchange. SecretSwap is an automated market maker (AMM) for SCRT and other network tokens (like SIENNA). Tokens purchased on the exchange can be privately transferred to other DApps on the network or transported over bridges to other blockchain networks.

The project’s primary goal at the moment is global adoption. It has devised incentives to entice developers to create applications based on secret contracts, as well as to demonstrate the network’s potential as a privacy-centric blockchain.

The project’s primary goal at the moment is global adoption. It has devised incentives to entice developers to create applications based on secret contracts, as well as to demonstrate the network’s potential as a privacy-centric blockchain.

The Bottom Line: Users’ Data Is Secure and Private.

Secret Network has enormous potential as the world gradually shifts toward more privacy-centric services. It is not the first blockchain project to provide private smart contracts, but because of the simplicity of its TEE solution, it is well-positioned to grab the market and gain worldwide adoption.

This article is designed for and should only be used as a reference. No material supplied by us should be construed as advice or a representation that any investment or trading strategy is suited for any specific person. These projections are based on industry trends, client conditions, and other considerations, and they include risks, variables, and uncertainties. There is no assurance given or implied as to the accuracy of specific forecasts, projections, or predictive assertions contained in this document. Our users accept that we are not responsible for any of your investment decisions. Before trading, please obtain expert guidance.