Everything around us started having more depths than usual. Phones are coming with better resolutions for more details. Movies are becoming 3D oriented and televisions are also coming in 3D for better movie experience. Even music is coming with better depth levels to give more euphoria. So when we can draw in 3D, then why not print in 3D too? Of course, I was referring to the computer aided drawing and modeling, not the childhood “Shakalaka boom boom” type. 3D printing is slowly and steadily getting accepted for its industrial applications.

The 3D printer might be a recent one, but the concept has been used for a very long time. The 3D printing has evolved so much since it’s inception. Yes, lathe machines in a way can be attributed to 3D printing’s ancestral family tree. We have seen so much innovations since then right from ordinary numerical controlled machines to CNC machines. They have all done the same work “3D Printing”. The concept we have drawn using a few codes, comes to life right in front of our eyes. Now, the technology that is intended on taking this evolution to the next step is the 3D printing.

In spite of the nascent nature of the additive manufacturing, people have started the way it will replace the age old conventional methods and revolutionize the manufacturing industry.

The medical industries also use 3D printing to print body parts for mock surgeries before the actual procedure.

India in a 3D perspective

3D printing has revolutionized many manufacturing techniques, and still a lot more has to be done with its aid. The Indian 3D printing industry looks extremely promising, just like rest of the world. The growth has been very encouraging with more and more companies adopting 3D printing to meet their manufacturing needs. The accelerated technology environment in the country will prove to be a great impetus for the 3D technology drive and adoption thereof. It not only shows great opportunities for the hardware but also the software for 3D printing. They expect to see the adoption trend to grow rapidly for the desktop systems. 3D printing is slowly creating its place in the mass manufacturing market due to its cost and time effectiveness. Besides, there is consumer interest as well in 3D printing. Just try to imagine the whole range of DIY that can be made at the comfort of our houses using this technology. With its applications branching out, there is surely no looking back for 3D printing any more (until humanity evolves to the next dimension).

The Global 3D Labs was jointly engineered to perfection by four founders. They are exactly what we call as a collective package for a printer’s evolution. Mr. Gopal Krishna has completed his B.E. in Industrial Production from Manipal Institute of Technology. He has co-founded other ventures like Project Parivartan, Expiscor Technologies and Foodzoned.com in the year 2010, 2013 and 2014 respectively. Hailing from the same college with a B.E. in Electronics and Communications is Mr. Aviral Kedia. He has also co-founded Expiscor Technologies along with Mr. Gopal Krishna back in 2013.

Mr. Manish Amin has completed his bachelors in Electronics and Communications Engineering from Mangalore Institute of Technology and Engineering, he has co-founded the Audax Group in 2013. The final member of the Global 3D Labs is Mr. Shreyas Kudva, a Computer Science Engineerfrom the Mangalore Institue of Technology and Engineering as well. Coming from different engineering backgrounds, we must’ve now realised why the founding team is a collective package.

Global 3D Labs was founded in September 2014 by this team. Their current strength is a team of 8 backed up by a powerful 3D printing technology and equipments. They are located in Bangalore and cater their services across earth’s dimensions. 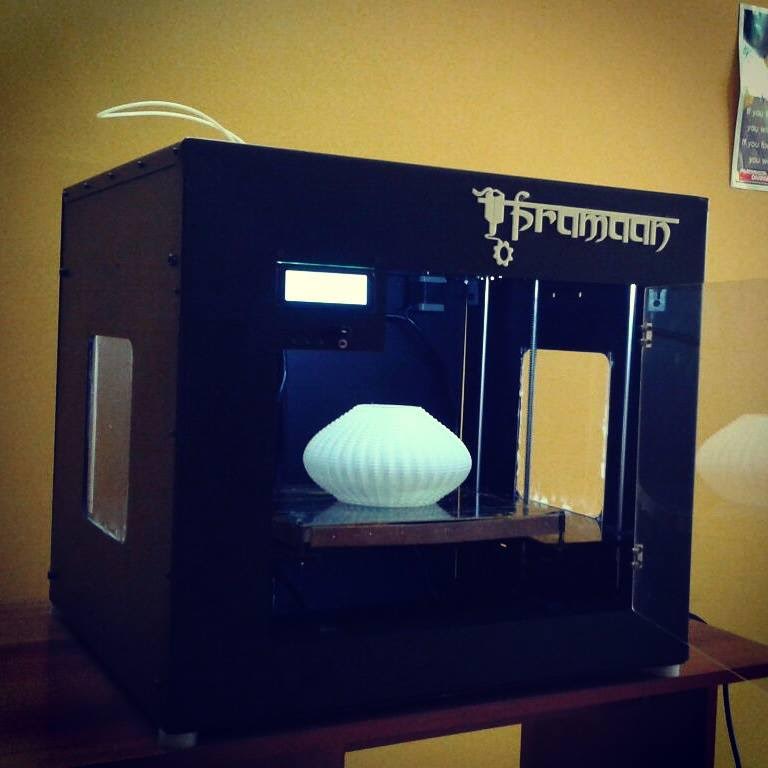 Global 3D Labs is coming up with two revolutionary new products bound to change the way 3D printers are perceived. The first product being launched is called the Pramaan V3. It comes with several new features like a double extruder which will make it possible to print with two different filaments. It will also feature an amazing feature called FilaSense, which is a filament sensor and will notify the user when the filament is entangled or about to get over. The auto bed leveling feature will eliminate the need for calibration making it more user friendly. Pramaan V3 will come with several connectivity options like Wi-Fi connectivity, cloud connectivity, USB and SD card. It will also feature octoprint making it possible to print wirelessly anytime and anywhere (portable printers). It also houses an on board camera which will provide a live feed of the print.

The second product is the all new Chocobot, a chocolate 3D printer. Chocobot is India’s first and the world’s second commercially available 3D printer. It can print directly with tempered chocolate including white, dark, milk etc. It features a modular head which is capable of printing molds for the complicated designs which can then be used with liquid chocolate.

For the coming months they intend to further push the products and also create awareness about the technology through their existing ‘Olive Programme’ which includes seminars, workshops and meetups. They see great potential in the Indian market and have been fortunate to receive positive responses. They