Hiring on a roll, 88% Indian cos to ramp up headcount: Survey 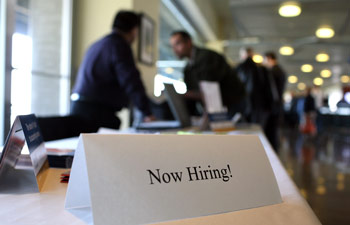 New Delhi, Nov 17 (PTI) : The job market is gaining traction around the world, including India, as 88 per cent employers in the country are planning to up their headcount, a survey by recruitment firm Antal International says.

According to the latest Antal Global Snapshot on hiring and firing trends covering more than 9,500 organisations in 30 key countries, job prospects for professionals and managers are continuing to improve.

In India, 63 per cent of companies are currently hiring, up 10 per cent over last year, indicating that an improving Indian economy is fueling demand for qualified managers and professionals.

Higher recruitment levels came as a big positive, with 88 per cent of organisations looking to increase their headcount. At the same time, 29 per cent asked staff to go, the survey which covered 2,292 companies in India, said.

“The 18th Antal Global Snapshot, which discovers hiring trends across global markets, shows that in India, consumer-focussed industries led by e-commerce companies are leading the hiring drive and will continue to do so in the next quarter, too,” Antal International India MD Joseph Devasia said.

Other sectors that have reported strong growth and whose hiring outlook remains high include education, pharma, ITeS and consumer electronics.

“While the third quarter may have seemed to slow a bit, more than 60 per cent of companies across all sectors are hiring, indicating a clear strategy focussed on growth,” Devasia said, adding that telecom, real estate and infrastructure seem to be shedding most staff.

Touching on verticals, the survey said experienced professionals in several key disciplines such as accounting and finance, human resource, operation and sales and marketing are markedly in short supply in India, adding that construction and banking professionals can expect high levels of competition in coming months.

According to the report, the current hiring across the globe is up at 70 per cent, from 68 per cent in January 2015. And the percentage of organisations that intend to hire in the coming quarter has also moved up to 68 per cent, from 66 per cent.

Moreover, globally, the percentage of organisations looking to lay off staff has fallen to 19 per cent, from the earlier 24 per cent.