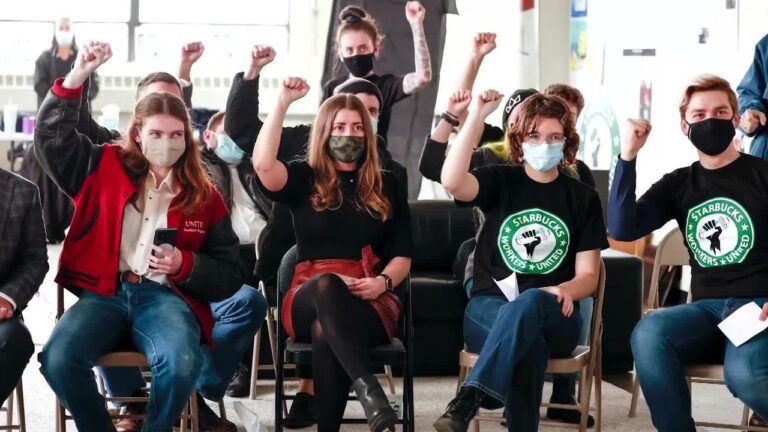 Workers of an Apple Store in Towson, Maryland made history yesterday as they voted to form a union. The vote and result became significant as this will be the first-ever labour union at the tech giant, Apple.

According to National Labour Relations Board in America, 65 workers voted for the unions, while 33 workers voted against. These are preliminary numbers. In the last few months, there were demands and actions from employees in the company, which asked for union rights. Even in the corporate ranks of the company, there was support for unionization.

Slowly, what started as individual voices turned into a collective movement within the company, famously known as #AppleToo.

Since the beginning of the pandemic in 2020, there has been a series of votes across the United States for unionizing. While some major businesses have avoided unions in their businesses, few companies like Microsoft have come out in conditional support of unionizing.

The results of the vote marked a major victory for retail workers at the tech company. We expect more votes to happen soon at different Apple stores and other offices of the mobile giant.

Right to have a say

Christie Pridgen, an organiser of the vote, said that while wages and compensation were an issue, it was not the only one. For workers, it was about having an opinion on how the store is run. Christie Pridgen told CNN Business that she is working in the Apple Store for more than 8 years.

She added that it is important for workers to have a say in hours of work, scheduling of work and establishing safety protocols.

“We wanted a say in the policies that affect our lives,” she said.

Ahead of the vote, Apple in a statement said that the company offers a very strong compensation and benefits for all employees. The statement went on to say that the company will provide leave benefits such as parental leave, family leave and also annual stock grants and health care among many other benefits.
There have been no comments from the company after the results of the vote. According to news agencies, apple’s spokesperson declined to comment on the vote.
Apple Coalition of Organized Retail Employees, (AppleCORE) which won the vote on Saturday is backed by the International Association of Machinists. IAM is famous for its strength in the production sector of the US airlines industry, mainly being.
IAM President Robert Martinez congratulated AppleCORE members of Towson for winning the vote. He said that AppleCORE members sacrificed a lot to conduct the vote and win it. He also added that the victory will be an inspiration for thousands of Apple employees across the country.
Since the beginning of 2021, Amazon, Starbucks, and other companies saw union demands and votes.
In April 2022, the union got constituted and voted into in Staten Island, New York. Workers at an Amazon distribution centre organised the formation of the union. Staten Island was also the first Amazon facility to vote in favour of unionization. Amazon has challenged the legality of the vote and results legally.
Another Amazon facility in Alabama tried to vote and constitute a union, which ended up as a failure.