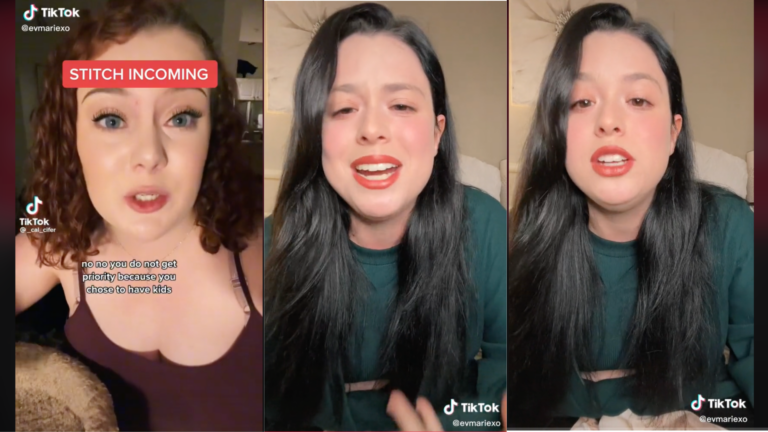 Having kids or not is your personal choice, but if you become a Karen who uses her kids as pawns to get her way at work, then you shouldn’t even have kids. Recently, a TikTok went viral where a girl shares her bad experience with a Karen at work.

The video starts with the girl saying that she used to work at a place and “had to move accross states” to work there. There she used to work with a Karen who had two kids and until the incident which she is going to narrate they got along quite well.

The girl then says that she wanted to go home for a week of Christmas break as she was homesick and just wanted to see her family. And for this she applied for leaves “months in advance” and even “sent multiple emails to her boss” regarding the same.

So, a week before the break when everything is already planned, she has packed and her friends and family is also expecting her, the girl gets called to the office by her boss who she calls bob in the video.

Bob tells her that he knows she is planning to take off for vacation but she talked to Karen and she wants to take her kids to Disneyworld next week.

Then he says, “I was really hoping that you can find it in your heart, to let her take your week, so she could spend some time with her children.”

The girl then says, “Bob, I literally put in for this months in advance, I have people, my family is expecting me.”

Bob then says that he knows but he was really hoping that she will consider giving her the week so she could spend time with her children. To which the girl asks did Karen even put in for this.

Well, the answer was “no” and she just came to Bob with this in the morning.

So, the girl says that she is sorry that Karen won;t be able to take her kids to disneyworld but she is not giving her the leaves.

Bob was disappointed and told her to go to Karen and tell her personally about the same.

She then went over the Karen explaining what conversation she had with Bob but she can’t give her week off to her. The girl then says “I am sure you take your kids to disneyworld some other time.”

The women turns on her Karen mode and starts saying “you don’t understand. I need to spend time with my children. They need to see their mother.”

The girl then says that she hasn’t seen her family in over a year but Karen doesn’t shut her trap and keeps yelling that she has no idea how a mother feels.