Kevin Durant just signed a multi-year deal with Coinbase Global. Durant will become a prominent face of Coinbase, which will provide him with advertisements and sponsored material. Durant’s decision is the latest in a long line of high-profile players who have jumped on the digital-asset bandwagon. 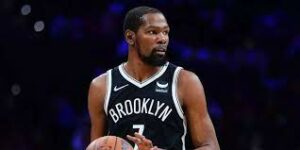 Kevin Durant’s company, Thirty-Five Ventures, has just signed a multi-year partnership with Bitcoin exchange Coinbase Global. Durant, who is now with the Brooklyn Nets, will help promote Coinbase through his many businesses and will serve as the company’s public face.

The first Coinbase commercial featuring Durant will debut on Thursday. In exchange, Coinbase will offer his sports website Boardroom with digital adverts and sponsored content, as well as assistance for his youth projects.

Financial details of the deal were not disclosed, but it indicates that Durant and Coinbase’s relationship is growing. Thirty-Five Ventures invested $100 million in Coinbase in 2017.

Meanwhile, after establishing a sponsorship arrangement with the NBA in October, Coinbase is extending its drive into professional sports.

Durant’s move is also the most recent in a long line of high-profile sports collaborations in the digital asset industry. Following Steph Curry’s purchase of a $180,000 Bored Ape NFT in August, the Golden State Warriors inked international cooperation with crypto exchange FTX earlier this week.

The NBA’s exclusive cryptocurrency platform partner, which also includes the Women’s National Basketball Association, NBA G League, NBA 2K League, and USA Basketball, has committed to be the largest US crypto exchange, according to a release.

NFL player Aaron Rodgers said in November that as part of his cooperation with Square, he would accept a portion of his pay in Bitcoin. The reigning NFL Most Valuable Player for 2020 said that he’ll be teaming with Square’s CashApp to get a portion of his income in the leading cryptocurrency.

While another footballer Tom Brady has been public about his NFC collection and digital memorabilia portal, Autograph. The iconic Staples Center in Los Angeles is being rebranded to Crypto.com Arena as part of a partnership signed in November.

Brady has been a vocal proponent of cryptocurrency and has built his own digital platform, which has since partnered with DraftKings and Lionsgate. He gave a fan one Bitcoin in October in exchange for returning the football he tossed after his 600th touchdown. Earlier this year, he and his wife, supermodel Gisele Bundchen, invested in cryptocurrency firm FTX, and he awarded a fan one Bitcoin for returning the football he threw for his 600th touchdown.