Kraken will open an office in Abu Dhabi

After gaining a complete license, Kraken will open an office in Abu Dhabi and become the first exchange to provide UAE dirham trading. The Middle East is one of the world’s fastest-growing cryptocurrency markets, accounting for 7% of worldwide trading volumes. 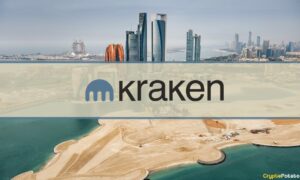 Kraken is expanding into the Middle East and will establish its regional headquarters in Abu Dhabi after obtaining a full license to operate a regulated trading platform in the UAE.

“We’re really excited to be able to set up our operations right in the ADGM [Abu Dhabi Global Market] itself to operate a virtual asset platform that finally offers Dirham pairings for investors in the region,” said Curtis Ting, Kraken’s managing director for Europe, the Middle East, and Africa.

Kraken will become the first cryptocurrency exchange to enable direct funding and trading in UAE dirhams against bitcoin, ether, and a number of other virtual assets after getting regulatory approval from the ADGM and the Financial Services Regulatory Authority for its local launch.

Kraken, which was launched in 2011 and now operates in over 60 countries, says that the UAE debut is part of a bigger incursion into an increasingly profitable market. The Middle East is one of the world’s fastest-growing cryptocurrency markets, accounting for 7% of global trading volumes, according to Chainalysis.

The UAE exchanges over $25 billion in cryptocurrency each year. According to Chainalysis data collected between July 2020 and June 2021, it ranks third in terms of volume in the area, following Lebanon (about $26 billion) and Turkey ($132.4 billion).

“One of the reasons we’re seeing an influx of entrepreneurs, builders, operators, and developers coming into Abu Dhabi and Dubai… is that there’s a sense of greater regulatory clarity at ADGM, in Dubai, and at the federal level,” Ronit Ghose, global head of fintech and digital at Citi, told CNBC’s “Capital Connection” on Thursday.

“Some of the talent the UAE has attracted in the previous 12 to 24 months under COVID is frankly astonishing,” Ghose added. “Is it truly starting to establish itself as a crypto hub as well as a Web3 hub?”

Binance is among several exploring expanding its presence in the Middle East, where cryptocurrency trading is getting more popular.

Binance was recently granted permission to operate in Abu Dhabi, where it will hire for over 100 positions. Last month, fellow exchange Bybit obtained approval to open a headquarters in Dubai, while FTX received a virtual-asset license in Dubai and will shortly establish a regional headquarters.