Liverpool to have cryptocurrency Shirt Sponsor

Liverpool is reportedly in talks with a cryptocurrency firm to become the club’s official jersey sponsor beginning next summer. The Reds have been sponsored by the banking and financial services corporation Standard Chartered since the start of the 2010-11 season. The £40 million-per-season contract, however, is set to expire at the end of the 2022-23 season. 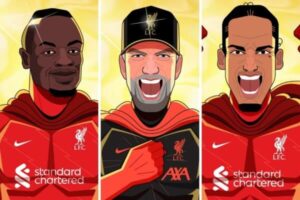 Image Source: This is Anfield

Liverpool is said to be in talks with a cryptocurrency company to become the club’s official jersey sponsor beginning next summer. Since the start of the 2010-11 season, the Reds have been sponsored by the banking and financial services business Standard Chartered. The contract, worth £40 million each season, is slated to expire at the end of the 2022-23 season.

Negotiations for a possible extension are presently continuing, but The Athletic reports that Liverpool is already in discussions with companies from a variety of other industries, including cryptocurrency firms.

According to David Ornstein, Liverpool is in talks with “a crypto exchange firm – a platform to purchase and sell digital currency – and a blockchain platform (a decentralized computer network that supports cryptocurrencies).”

The proposed sponsorship contract could net Liverpool more than £70 million over two seasons, but it is bound to generate controversy due to environmental concerns and the lack of regulation surrounding cryptocurrency.

Other Premier League clubs have sponsorship relationships with cryptocurrency companies, but none of them have one as their primary jersey sponsor.

During a match against Everton earlier this season, Palace fans held up a banner denouncing Socios as “parasites” in protest of their club’s relationship with the corporation.

Liverpool’s talks with cryptocurrency firms came after the club controversially released its own non-fungible tokens (NFT) in March.

The NFTs, digital artworks of Liverpool players and coaching staff, were auctioned off at Sotheby’s for $75 (£57) each, totaling roughly $12.8 million (£9.8 million).

According to The Daily Mail, the club sold less than 10,000 of the 171,000 available NFTs, indicating that they did not pique the public’s interest.

Despite the negative reaction from fans, Liverpool raised £1.1 million from the sale of the NFTs, with £281,374 going to the club’s charity, the LFC Foundation.

If you find this article informative then do not forget to share it with your friends and family! Let us know what you think about the topic in the comment section below.