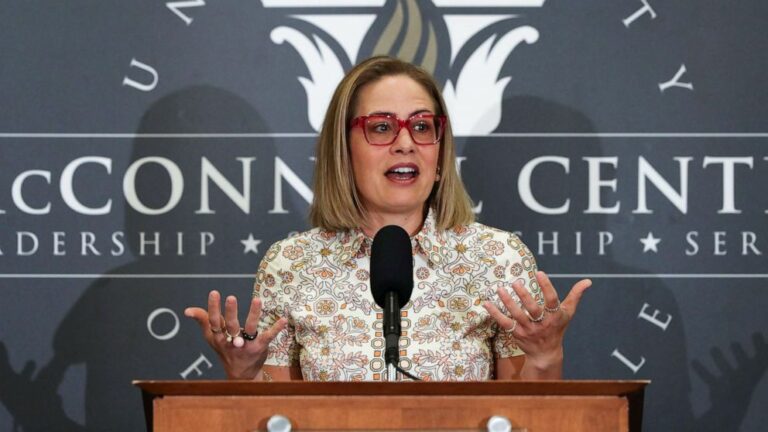 The ever-growing popularity of TikTok and social media, in general, doesn’t need particular anecdotes. Just flipping through the insane million views will be enough. TikTok has indeed grown to become a platform well-equipped to disseminate information to the masses. However, the growing potential of technology blended with the popularity and influence of social media has its own disadvantages. Because sometimes, they make it rather easier to fabricate facts and manipulate people. Recently, a video posted on TikTok featuring former US President Donald Trump and Senator Kyrsten Sinema piqued the attention of users. Although it is pretty obvious from the appearance and quality of the video that it is sake, some users took it at face value following which the account was suspended. Read along to know more.

A TikTok account famous for its satirical videos got into trouble as the account itself got suspended for posting a video featuring former US president Donald Trump and Senator Kyrsten Sinema. The account was run by Paul Lathicks and he isn’t exactly very happy about the account being suspended for the people’s inability to understand what he calls ‘political satire.” In the video, you can see Sinema introducing Trump during a recent rally, quite enthusiastically.

This is not the first time Sinema has made headlines. She has quite a reputation for consistently pushing back her party’s so-called agenda. In fact, she was even labeled to be the “most effective first-time senator” by Senate Minority leader Mitch McConnell.

The poor quality of the video made it quite easy for the users to discern that it was nothing but a fake. However, it did manage to fool some of the users who thought it was real. Can we blame them? Thanks to the brilliant progress of technologies, these days it is quite a task to differentiate between a fake and a real. We already saw the Keanu Reeves deepfake creating a stir on TikTok and Instagram.

The video that caused all the stir on TikTok was actually an old video from 2015 rally in Las Vegas featuring a Hispanic woman on stage enthusiastically expressing her support for Trump. Sinema’s face was merely placed over this woman’s, making it look as if it took place recently.

Paul Lathicks, the owner of the account wasn’t ready to take lightly the accusations of users who were of the opinion that he was spreading disinformation. He lashed out them in pretty strong language, expressing his disappointment and anger at their inability to comprehend political satire.