Lucid’s CEO Peter Rawlinson stated that the increase in Lucid Air prices would not be applicable for current pre-orders. It will be for those who order from next month. More details about the increase in price were revealed from the 8-K SEC filing. The news comes as the company released its Q1 2022 financial results.

“We announced today that we are increasing prices of our vehicles that will go into effect at the beginning of June. The world has changed dramatically from the time we first announced Lucid Air pricing in September 2020, but I want to reassure our existing reservation holders that we will be honoring current pricing for them as well as for any new reservations made before the end of the month,” Rawlinson stated.

As the Lucid CEO confirmed, the Air’s new pricing will go into effect on June 1, 2022. The EV automaker noted in its announcement that reservation holders would have “an opportunity to order” their Lucid Airs at the original price they reserved. Customers who order Lucid Air vehicles before June 1 will also avail the company’s current pricing. The new price list for the Lucid Air lineup is shared below. 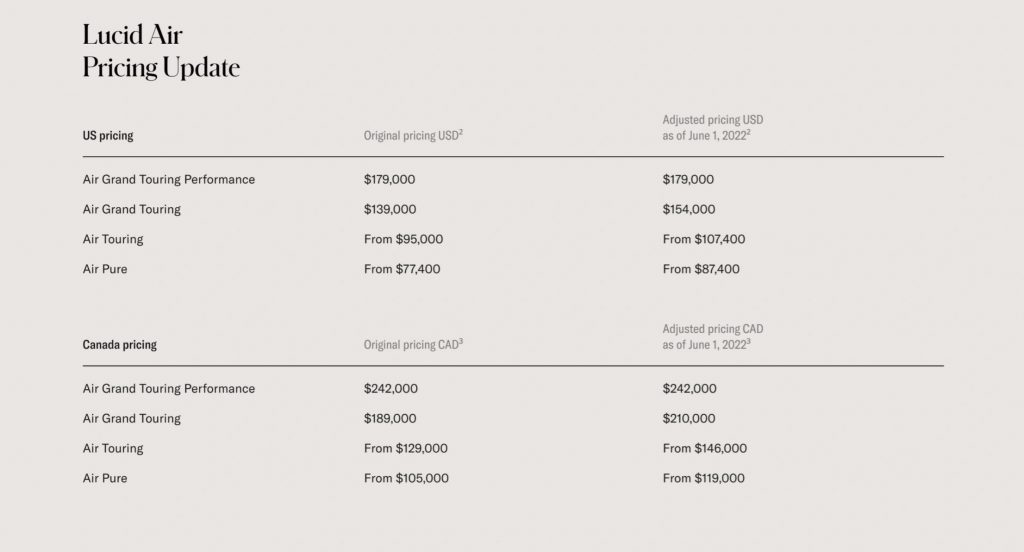 In its 10-Q Sec filling, Lucid noted the ongoing impact of the COVID-19 pandemic. The automaker highlighted that the pandemic has caused logistics and supply chain challenges, including increased port congestion and supplier delays. It also mentioned a continued “shortfall” in semiconductor supply.

“In addition, prices and transportation expenses for these materials fluctuate depending on many factors beyond our control, including fluctuations in supply and demand, currency fluctuations, tariffs and taxes, fluctuations and shortages in petroleum supply, freight charges, and other economic and political factors.

These risks could be further magnified by geographical developments such as the conflict between Ukraine and Russia. Substantial increases in the prices for our materials or prices charged to us, such as those charged by battery cell or semiconductor suppliers, would increase our operating costs and could reduce our margins if we cannot recoup the increased costs through increased prices,” Lucid’s 10-K filing said. Furthermore, Lucid reported Q1 revenue of $57.7 million. It delivered 360 vehicles in the quarter. The EV manufacturer claimed it saw strong demand with more than 30,000 customer reservations, reflecting potential sales of $2.9 billion. Lucid maintains a volume of 12,000 to 14,000 vehicles for 2022. Additionally, more models are expected to be launched.