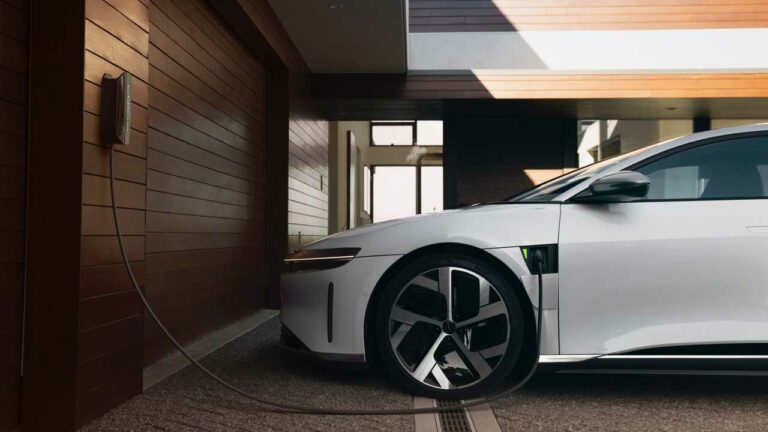 Lucid Motors launches a new line of accessories for its Air Luxury EV. These include a new roof storage system and the brand’s first home charging station hardware. The home charger is much faster than the already provided mobile charging cable that can be wall-mounted.

The earlier cable supports up to 9.6-kilowatt charging when connected to a 240-volt, NEMA 14-50 wall outlet, adding around 40 miles of range per hour connected optimally. However, the Air supports up to 19.2-kW Level 2 AC charging, so this bundled charger leaves a bit of speed on the table. The newly announced Lucid Connect Home Charging Station steps up to the full 19.2-kW charging speed, adding up to 80 miles of range per hour connected, provided your home electrical system can handle it. Which is double the speed of the included cable. The presumably hardwired, compact station can be wall-mounted indoors or outside and uses “the smallest enclosure possible” according to Lucid’s release. At the business, the end is a 24-foot charging cable that the automaker claims are thinner and more lightweight than those of competing home charging stations, despite delivering significantly more power.

There are the new Lucid Air Crossbars ($500) that add an aluminum rack to the EV’s roof capable of supporting up to 165 pounds of gear and compatible with Yakima’s system of bike, kayak, and surfboard mounts. The Lucid Air Cargo Capsule ($2,000) is an aerodynamic ABS roof box that adds around 11.5 cubic feet of capacity to the Air’s roof. The Capsule features an ambidextrous opening, ensuring accessibility from either side of the vehicle, as well as interior lighting. Finally, the Lucid Air All-Weather Mats ($250) is, well, chunky weatherproof mats that protect the EV’s carpet from mud and grime. Sold as a set of three, they come in four colors: Ceramic, Graphite, Saddle, or black.

Lucid Motors’ new lineup of Air accessories is available for order now with the first examples beginning shipments in Q4 2022, with the exception of the Cargo Capsule, which should arrive in early 2023. The $1200 charger can hit a peak of 19.2 kW of electric power, a rate of charge that will add 80 miles of range to the battery for every hour of charging.

“This product serves as the first offering to support Lucid customers looking to integrate their vehicle into the company’s future energy ecosystem,” Lucid said. The charger is just one of several Lucid accessories announced today. You can now get your Lucid with everything from a $2000 rooftop “Air Cargo Capsule” for hauling gear on long trips, to $500 rooftop crossbars compatible with several Yakima racks that accommodate everything from bicycles to surfboards to kayaks.