The dynamic field of robotics always has something new and innovative to present. In the past few decades, the field has seen a large amount of development due to the advancement in technology and was able to roll out robots that were capable of carrying out functions which human beings could not.

Robots are also used to carry out tasks in areas which contain extreme weather conditions that humans find quite difficult to withstand. Similarly, they are capable of performing tasks that demand machine like precision and handling of delicate objects and components that are microscopic in size.

Robotics usually derives its inspiration from nature in order to develop robots that are able to blend into the environment which contain sensitive flora and fauna. These robots have similar features such as the creatures found in those surroundings and can be used to capture and collect sensitive data without disturbing and harming the life around it.

Recently a team of researchers from the Ben-Gurion University of the Negev (BGU) have now developed a new high speed amphibious robot. This robot is inspired by the movements of cockroaches and lizards and is capable of swimming and running on top of water surfaces at a very high speed. Along with that, this robot is also capable of crawling on difficult terrains.

The name of this robot is AmphiSTAR and is part of the STAR robots that are developed by the lab. The AmphiSTAR is a wheeled robot which is fitted with two propellers underneath whose exes are possible to be tilted with the help of sprawl mechanisms.

The details about the design and the control system of this robot were presented virtually at the International Conference on Intelligent Robots and Systems (IROS). It was presented by Dr David Zarrouk who is the Director of Bioinspired and Medical Robotics Laboratory in the Department of Mechanical Engineering at BGU along with Avi Cohen who is a graduate student. 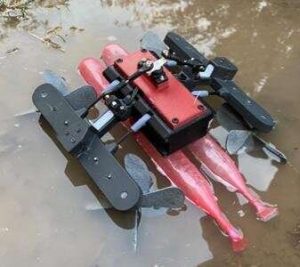 Dr David Zarrouk said, “The AmphiSTAR uses a sprawling mechanism inspired by cockroaches, and it is designed to run on water at high speeds like the basilisk lizard.”

He also added that, “We envision that AmphiSTAR can be used for agricultural, search and rescue and excavation applications, where both crawling and swimming are required.”

The propellers that are fit underneath the robot carry out two major duties. On the ground, these propellers act as wheels and on the water they act as fins to propel the robot. This enables the robot to swim and run on water at the speed of 1.5 m/s. The AmphiSTAR is also equipped with two air tanks that allow it to float and transition efficiently from high speed while hovering on water to lower speed for swimming and also from crawling to swimming and from swimming to crawling.

More than we witness that science derives its inspiration from nature in order to replicate functions and characteristics of creatures in an artificial setting. The design is often inspired by animals which have gone through millions of years of evolution. Since those are the best features to survive in such environments, we find a lot of robots replicating it.

Dr David Zarrouk said, “Our future research will focus on the scalability of the robot and on underwater swimming.”