Researchers at Northwestern University have now developed a new life-like material that is capable of acting as a soft robot. This first of a kind life like material can walk at the pace of a human, can pick up and transport cargo, climb up on hills and even break dance in order to release a particle.

The robot is the size of a centimeter and nearly 90% of its weight consists of water. This robot is capable of moving without the need of any complex hardware, electricity or hydraulics. This robot makes use of light in order to get activated and walks towards an external rotating magnetic field.

This experimental research was led by Samuel I. Stupp. Samuel I. Stupp is currently serving as the Board of Trustees Professor of Materials Science and Engineering, Chemistry, Medicine and Biomedical Engineering at Northwestern University.

While describing the robot he said, “Conventional robots are typically heavy machines with lots of hardware and electronics that are unable to interact safely with soft structures, including humans.”

He also added that, “We have designed soft materials with molecular intelligence to enable them to behave like robots of any size and perform useful functions in tiny spaces, underwater or underground.” 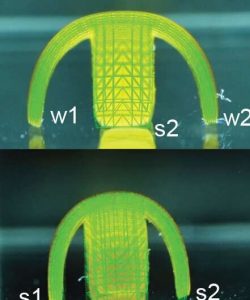 This robot resembles a four legged octopus and functions within a tank filled with water. This quality makes it ideal to be used in water bodies. It is possible to molecularly design these robots and make them capable of recognizing and removing any unwanted particles present in specific environments. The robot can also be used to deliver bio therapeutics or cells to a specific tissue with the help of its locomotion and mechanical movements.

She said, “By combining walking and steering motions together, we can program specific sequences of magnetic fields, which remotely operate the robot and direct it to follow paths on flat or inclined surfaces.”

While adding further she said, “This programmable feature allows us to direct the robot through narrow passages with complex routes.”

The robot is capable of carrying out precise movements and is quite agile. This is due to its water filled structure and its embedded skeleton made out of aligned ferromagnetic nickel filaments. It responds to light with the help of its soft components, it holds or expels water in its interior and can have the right amount of stiffness to respond to the magnetic fields.

While speaking about the design and the functioning of the robot Samuel I. Stupp said, “The design of the new materials that imitate living creatures allows not only a faster response but also the performance of more sophisticated functions.”

Adding further he said, “We can change the shape and add legs to the synthetic creatures, and give these lifeless materials new walking gaits and smarter behaviors. This makes them highly versatile and amenable to different tasks.”

When the robot is exposed to a rotating magnetic field, the robot’s embedded skeleton exerts cyclic forces upon the soft molecular network which activates the robot’s legs. This rotating field can be programmed to make the robot navigate on a predetermined path.