New Robot Made Out of Soft Materials Capable of Moving Quickly

An international team of researchers at the Johannes Kepler University has developed a new robot made out of soft materials. Soft machines such as these are capable of reacting by making use of weak magnetic fields and move around quickly. These machines can attain such high levels of speed that they can even grab a fly that has landed on it. The details about this robot are published in an article in the journal ‘Communications Materials.’

Martin Kaltenbrunner and his team consisting of researchers from the JKU’s Department of Soft Matter Physics and the LIT Soft Materials Lab have been attempting to develop a soft materials based system. While creating these kinds of systems it is vital to create conductive conditions that are able to support interactions between human and robot in the future without the solid machine posing any threat to the humans.

The field of science and robotics is quite a dynamic one. We are frequently presented with newer and better innovations that aim at making our lives simple and make our jobs easier. The advancement in the robotics field has been quite rapid since the past few decades due to the development in the science and technology sector.

As the time goes by, we can see that the involvement of robots in our day to day lives has been increasing. Almost all the sectors make use of robots, predominantly those where the jobs are dangerous. Robots are used to carry out tasks that might pose a threat to human life or perform activities that demand machine like precision.

Robots have proved to be beneficial for the companies that use them by increasing the efficiency of work done and are also capable of increasing the workplace safety for humans. The field of robotics is developing rapidly with newer and better techniques present. 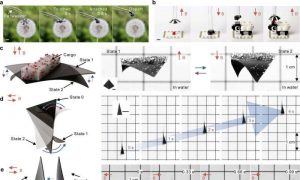 A team of scientists that is led by Martin Kaltenbrunner and Denys Makarov from the Helmholtz Center Dresden-Rossendorf are now elevating the development of soft robots one step further. According to both researchers, a major limitation suffered by these wirelessly designed soft robots was that they were very slow when it came to changing the shape. The researchers then developed a new idea that was based on making use of flexible plastic polydimethylsiloxane and a mixture of magnetic micro particles like the alloy of neodymium, boron and iron.

The researchers then proceeded to provide their small and soft robots with different shapes. When the robots were exposed to a changing magnetic field in their environment, they were able to move in different ways based on their shape, the thickness of the materials used and the locations where the micro particles were placed.

These actuators actually weigh just a few micrograms and have a few micrometers of thinness. This means that these actuators require little amount of energy to move. Also, the components are capable of repeating the movements a million of times without any changes.

According to the scientists, this technology can pave the way for newer openings for developing soft robots that are also capable of moving fast. As their long term goal, the scientists are planning on developing more complex mini machines which are capable of helping to unblock blood vessels in the human body. The materials required to carry out this project need to be biodegradable and easy to control.