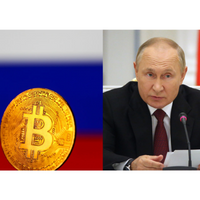 Russian President Vladimir Putin shares the need for a new, non-Western digital currency or payment mechanism for international settlements. Furthermore, President Putin believes that international financial institutions should be based on open democratic principles and reflect the reality of a multipolar world.

The presentation also emphasized the importance of open democratic values. Additionally the need for global financial institutions to reflect the multipolar world’s realities.

The president further stated, “In the conditions of the current illegitimate restrictions, settlements are one of the attack lines.” He added, “The current international payment system is expensive, and its correspondent account system and regulation are controlled by a small group of states and financial companies.

Additionally, Putin emphasized the need for a new and independent international settlement system amid the sanctions and limitations placed on his nation. The President promised that there wouldn’t be any banks or outside interference in the new system.

The digitized currency Putin stated in his address. He claimed that international settlements are now threatened due to Russia’s strained ties with the Western giants.

The President talked about Sberbank. Sberbank is a state-owned Russian banking and financial services corporation. It has its headquarters in Moscow. It was amongst one of the first to use artificial intelligence broadly.

Putin applauded the bank’s efforts and stated that Sberbank’s AI-enabled solutions increased the quality and convenience of services provided to people, businesses, and corporate clients.

Something more about Digital Currency

Digital money, sometimes known as digital cash, is any payment only available electronically. Digital currency is not a physical object like a coin or a dollar bill. Instead, online systems are used for accounting and transfer. The digital currency known as Bitcoin is one of the more well-known types. Fiat money, like dollars or euros, can also be represented by digital money. Technologies like cell phones, credit cards, and online cryptocurrency exchanges are used to transact with digital money. In some circumstances, it can be changed into actual cash by using an ATM.

Digital money is different from physical money in that it streamlines the transactional process. For instance, compared to traditional money, the technological underpinnings of digital money can facilitate and expedite monetary transactions across borders.

The mechanism for central banks to enact monetary policy is also made more straightforward by this type of money. Some types of digital currency employ cryptography to complete their transactions censorship- and tamper-resistant, making it impossible for governments or private organizations to regulate them.

There have been rumors about Russia considering cryptocurrencies for cross-border payments ever since the Ukraine conflict erupted. The EU expanded its crypto sanctions in response. The Central Bank of Russia has been cautious about cryptocurrencies and eager to encourage regulated digital assets. The Russian Prime Minister set a deadline of December for a series of activities involving the use of cryptocurrency, a digital ruble, and tokenized real-world assets for settlement in September.

If Putin’s statements are genuine, his dissatisfaction with the banking sector applies not only to the dominant state-controlled Sberbank but also to the Central Bank of Russia.