Reliance to Bring UK Sandwich Company Pret A Manger to India Reliance said that they will open outlets of Pret A Manger in India under a franchise deal with them.

One of the most successful conglomerates in the country, Reliance Industries, came out to say that they will be bringing the sandwich chain, Pret A Manger, which is based in the United Kingdom to India very soon. This will be a franchise run by the group as they look to plant firm feet in the food and beverage sector in the country which has been steadily growing recently. 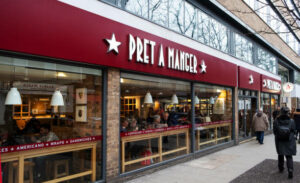 Reliance Brands which is a subsidiary of the conglomerate said that they would initiate this by opening up stores of Pret in major cities in the country such as Mumbai and Bangalore at first.

Mr. Darshan Mehta, the chief executive of the company said that this venture has great potential to be a very successful chain in the country. Pret is mainly known in the United Kingdom for their wide range of pricey sandwiches, coffee, a bunch of other baked goods.

They went on to say that the first branch will open up in Bombay, some time in March, next year and by 2025, India will be in the top 3 of the largest Pret networks in the world.

Pret A Manger, although was started in United Kingdom, is a French sentence, meaning ‘Ready to Eat’. The firm was established 39 years ago, back in 1983 and it currently has well over 500 stores all across the globe. Its first ever store and its head office are both situated in London, United Kingdom.

The main competitors of Pret in the country would be Starbucks, which has partnered up with Tata, Café Coffee Day, and Dunkin Donuts, which is not as prevalent as the previous two but is still growing. So, it is safe to say that Reliance Industries and Pret A Manger, both have their work cut out of them, if they want to break in to such a competitive market.

It seems like Reliance is now one of the largest players in every industry that exists in the country. The industry is digging deep in to retail currently with well over 2,100 outlets sprawled across the nation. They even have partnership with some of the most elite companies in the world such as Jimmy Choo as they look to make the entire country’s population in their demographic.

No matter which part of the country you are from, or how old you are, or how much money you have, it seems like we are all customers of Reliance one way or another.