A Russian film crew, complete with an actor and a film director, have returned to Earth after shooting the world’s first movie in space, by spending 12 days on the International Space Station. Yulia Peresild and Klim Shipenko landed back on Earth as had been scheduled on Kazakhstan’s grounds, in the early hours of Sunday, as per footage that was broadcast live by the Russian space agency, Roscosmos.

The First to Film in Space

They were brought back home by cosmonaut (the Russian term for “astronauts”) Oleg Novitsky, who has spent the last six months on the Space Station. Following the landing, Roscosmos tweeted that the the crew’s spacecraft, Souza MS-18, is “standing upright and secure,” while also adding that the crew are all “feeling good.” The trip was roughly three hours long, as the ship landed with no incidents at 10:35 a.m. Kazakhstan local time. 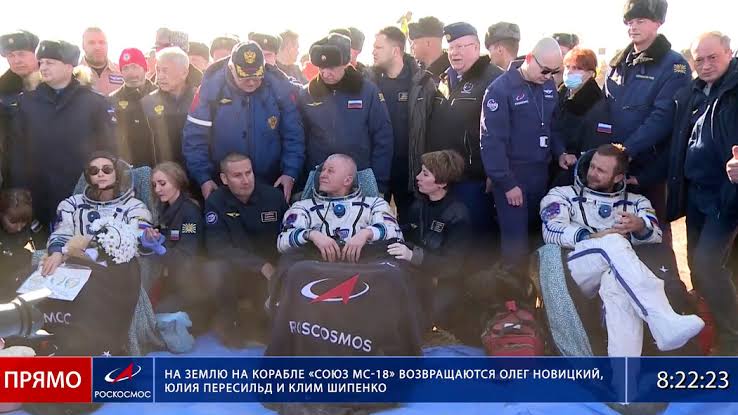 The film crew had blasted off earlier this month from Kazakhstan’s Russia-leased Baikonur Cosmodrome. They went on their way to the ISS along with veteran cosmonaut Anton Shkaplerov, in order to shoot scenes for the movie, The Challenge. The movie apparently revolves around a surgeon dispatched to to ISS to save a cosmonaut’s life.

Provided things go well for the project, the Russian team might end up beating a Hollywood film that was announced by Tom Cruise together with Elon Musk’s SpaceX firm SpaceX and NASA. Shkaplerov, along with the two Russian cosmonauts currently residing aboard the ISS, are rumored to have cameo roles in the movie.

But not everything went smoothly, as Shkaplerov apparently had to switch to manual control when the crew first docked at the ISS. And then just this Friday, when Russian flight controllers were conducting tests on the Soyuz craft, its thruster fired unexpectedly, destabilizing the ISS for as long as 30 minutes. The news was relayed by a NASA spokesperson to TASS, a Russian news outlet.

The spacecraft’s landing is also set to feature in the movie, according to co-producer and the head of the Kremlin-friendly TV network Channel One, Konstantin Ernst.

Seems like Russia has snagged another space first in its ever-long list. The country had been the first in the world to launch a satellite (Sputnik) into orbit. Also sent into space were the first man, Yuri Gagarin, the first woman, Valentina Tereshkova, and even the first animal, a dog named Laika.