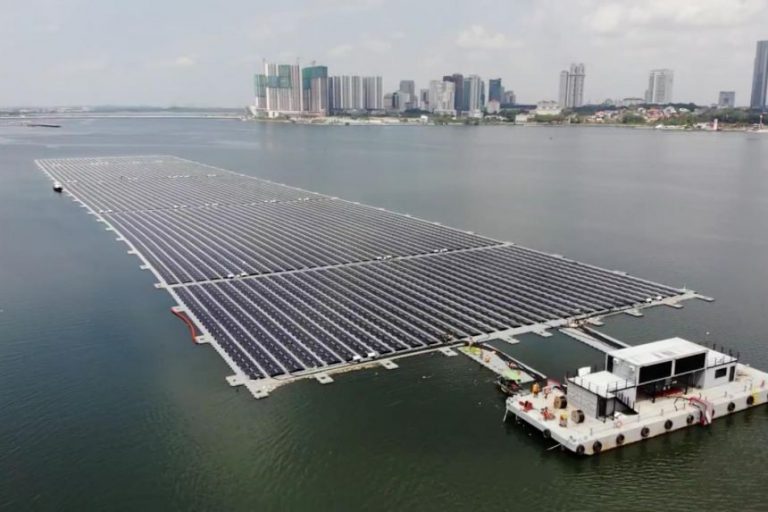 Singapore to use Floating Solar Farms as Land is Densely Populated

Singapore is giving a push towards sustainable energy, with floating solar farms. Being a densely populated country, they have limited land area. Innovative methods to meet the requirements in renewable energy production are much needed.

The other sustainable energy production like wind, hydro, and biomass were ruled out as they need land. Furthermore, floating solar farms are one of the effective ways. Which the country has started working long before other countries started it.

The 5MW offshore project inaugurated on Johor Strait is also a part of their current goals. As the minister for education stated,

“Compared to bigger countries. We do not have the natural resources, land area and climatic conditions for the large-scale deployment of renewable energy sources.”

South Asian countries have the same problem when it comes to pushing their goals with renewable energy. As Singapore moves towards innovating methods, it is expected to be a “living laboratory” as stated by the minister.

Additionally, it is expected that by 2030, hydropower will be able to provide at least 40% of the power all over the world. Meanwhile, other countries like South Korea and China have set a target by 2050 and 2060 respectively.

“Solar energy would only be able to produce 10%-20% of Singapore’s power supply mix because of land constraints. Singapore needs to think out of the box and become more creative than other countries in where to put solar panels.”

Not only floating solar farms, but the country has also been testing out other methods. Some of them include panels on buildings, fencing, mobile grids, car parks, and roads. On a further note, he also added,

“New solar technology developments support these options. Also, the massive cost reductions over the past decade allow to cost-effectively install PV. Like on the vertical parts of a building.”

By combining photovoltaic systems and rooftop technologies, the country is working on Solar+. As per their research results, floating solar farms generate more electricity than rooftops or on-ground.

As per their current plans, the solar farm is being built on Singapore’s Tengah Reservoir. The plant’s size is going to be equal to 45 football pitches. With each construction, they are beating their own previous targets. So, the one on Tengah is also going to be the largest in the region.

Besides, they also plan on having more electric point charges and reducing registrations for fuel-based cars. As told by the deputy chief,

“Singapore’s push for solar is not only for providing green electricity, but also for creating jobs, economic value, and innovations. The new technologies would not only solve Singapore’s challenges but also have opportunities for other megacities.”