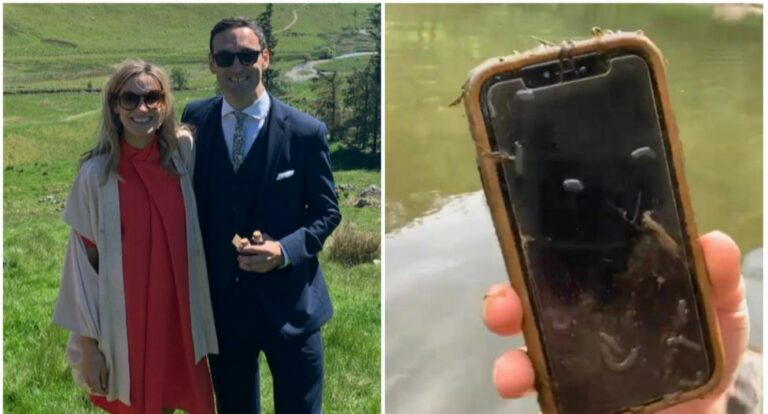 How often do you get back a phone which was lost in a river? Very less right. In an amazing turn of events, a man who dropped his iPhone in a river almost a year ago got it back. How? With help of social media.

In August 2021, a guy named Owain Davis and his fiancé Fiona Gardner from Edinburgh went canoeing. They were in a two-person canoe and while canoeing Fiona decided to stand up which resulted in both of them falling off the canoe.

Owain told BBC that the moment he was in the water, he knew the phone jumped out of his back pocket.

A few months after the incident a Facebook user named Miggy Ps hailing from Gloucestershire, South West England posted in a local Facebook group about how he found an iPhone while canoeing in the Wye River.

He thought that phone was of no good as it was full of water and had been submerged underwater for a long time.

Still, he took the phone to his house and dried it. The next day he put the phone on charge and to his surprise, the device was still in working condition.

On the screensaver, the date was shown as August 13 and had a photo of a couple (Owain Davis and Fiona Gardner).

Miggy Ps set out on a mission to find out the rightful owners of the phone and hand it back to them. He posted photos of the device and screensaver on the Facebook group named Cinder Noticeboard.

Thousands of users who were part of the group helped him amplify the post as it got shared almost 4000 times.

On finding out the actual address of the couple in Edinburgh, Miggy Ps, whose real name is Miguel Pacheco sent the phone to the rightful owner.

Owain Davis told BBC that he was impressed by how Miguel tried to help him get his phone back.

Miguel told BBC Radio Gloucestershire that he tried to dry the phone and then find the rightful owner, as there would have been many sentimental moments stored in that phone.

He added that if he lost his phone which had a lot of pictures of his children in it, he would want that back.

Many incidents like this happen every year when social media comes to the rescue. But after this incident, netizens are going crazy about a single question – How long an iPhone can stay functional if it is left in water?