One of the biggest influencers on customer service has been the rise of social media.Till now companies have focused on factors such as First Call Resolution (FCR) or Average Hold Time (AHT) to gauge customer service agent’s performance as a link between the contact center and its customers. However, today social media has trumped all these metrics. 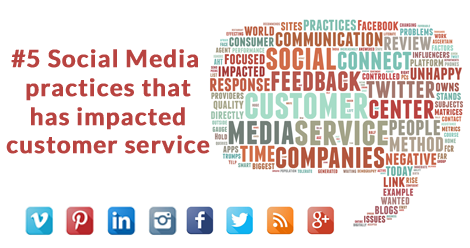 Now a days people are all constantly connected – at home through laptops or tablets, at work through desktop PCs and of course, smart phones ascertain a 24x 7 link to the outside world. Social media is always on as the preferred method of communication. There is consumer- generated social media, there is a broad- based social media like Facebook and Twitter, there is company- owned social media and then there is a more focused media like video sites and blogs or consumer review sites such as Yelp, Amazon and Planet- Feedback. All these communication channels are affecting the method and quality of customer service, in fact there are social media management software available to take SMM and customer services to next level. Here, I have list the 5 practices which are changing the face of customer service.

This story is contributed by