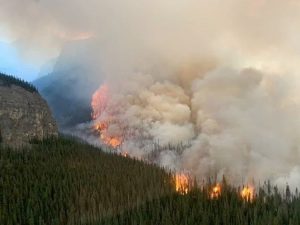 A country’s future is held in the hands of the young. This has been proven once again with the South Surrey high school student, Gurik Mangat. Mangat designed an application that is capable of giving fire fighters real time information about possible threats. Being a first hand witness to the massive destruction caused by wild fires, blended with curiosity about artificial intelligence within a framework of scientific knowledge resulted in this innovative creation by the 17 year old.

Mangat’s project named ‘FyreWatch: Deep Learning for Accurate Wildfire Environmental Conditions Detection’ was selected by a panel that included educators and researchers. The panelists expressed their admiration of the criticial thinking, curiosity and excellence of these students, who preserved them even during the pandemic.

‘FyreWatch’ will adorn him with the credit of being one among the eight students who will represent Canada at the Regeneron International Science and Engineering Fair.

‘FyreWatch’ is the result of over a year’s worth of effort and research. It presents an admirable prototype that throws light on the immense potential of the technology that can be harnessed in the future to effectively shield against a calamity. The application is mostly based on deep learning with primary focus on neural networks. The AI algorithm run on the data can facilitate the detection of potential wildfire conditions.

Firefighters can inspect wildfire conditions of any particular area, by using remote sensors and satellite data to input co-ordinates to the application.

The inspiration for the project came from witnessing the destruction that can be caused even by a small scale wild fire. It is true that adversity fuels invention. It is with these insights that one achieves from these real life experiences that adds a certain perspective which can act as the framework of our actions, polished and refined by a high level of inspiration. In Mangat’s words,

“When you actually go there and see how big the destruction is – and that wasn’t even the largest fire – it puts it into a perspective for you.”

He was talking about the sight he saw at Banff, Alta.

Mangat also mentioned how it was YouTube that actually helped him to gain practical knowledge about the subject, in addition to books from library. Though the books helped, he found the centralized information provided by the social platform much easier to grasp and learn. (A rather hard curve ball for those who insist on the futility of spending hours watching YouTube videos.)

In future, Mangat sees himself as an engineering student, though his interests are divided among artificial intelligence and space.