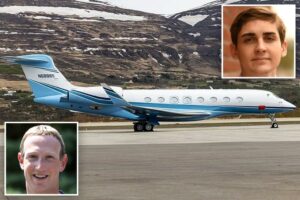 On Wednesday, May 18, Jack Sweeney confirmed that he had re-discovered Mark Zuckerberg’s private jet. This is the same teen who was responsible for keeping track of Elon Musk’s aircraft previously. He took to Twitter to post the update on his personal account, with a picture of the aircraft.

Moreover, this is not the first instance when the teenager has tried to track Zuckerberg’s whereabouts. In February this year, Sweeney started tracking and sharing updates about what he claimed was the Meta CEO’s private jet. He did it through an account on Twitter called @ZuccJet. In April, he stated that he gained the knowledge about the jet no longer being used by the billionaire CEO, and that it was back to the drawing board.

Additionally, Sweeney specified on Twitter that since then, he has had the ability to draw a connection between Zuckerberg’s trips with the travel history of the newest jet. As of now, neither Sweeney, nor the spokespeople for Meta or Zuckerberg’s family have acknowledged any requests made for a comment on the situation.

According to Meta’s latest regulatory filing with the SEC, the tech giant stated that they initiated the chartering of a new aircraft for Zuckerberg in March. The filing specified that Zuckerberg was indeed the owner of the jet, which is being operated by an independent charter company. Meta also stated in the filing that the Facebook CEO’s security team has identified numerous threats to Zuckerberg.

Reports from April revealed that Meta had spent a record $26.8 million on the CEO’s security and private jet travel last year. Moreover, reports from 2019 specified how the billionaire had 24/7  bodyguard protection that year, along with an access to an office with provisions of a panic button and bullet-resistant glass.

“We believe that Mr. Zuckerberg’s role puts him in a unique position: he is synonymous with Meta and, as a result, negative sentiment regarding our company is directly associated with, and often transferred to, Mr. Zuckerberg,” the filing said. “Mr. Zuckerberg is one of the most-recognized executives in the world, in large part as a result of the size of our user base and our continued exposure to global media, legislative, and regulatory attention.”

In early 2022, Musk expressed concerns regarding Sweeney creating an account aimed at tracking his personal travel. This account, @ElonJet, has more than 400,000 followers presently. Moreover, the Tesla Chief Executive even offered Sweeney $5,000 in exchange for taking down the account, which the teen rejected.

Other than the two billionaire CEOs, Sweeney even began tracking of the movements of Russian oligarchs after the Russian invasion of Ukraine. Additionally, he even has accounts dedicated to other personalities such as Bill Gates and Mark Cuban.