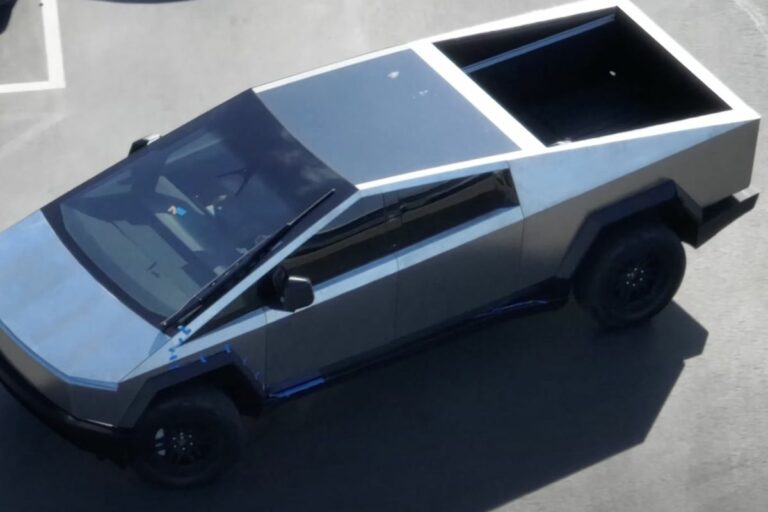 Tesla Cybertruck was spotted on the manufacturer’s test track in Fermont on Friday. The design changes of the Cybertruck showed massive windshield wiper blades that the company planned to use on the next-generation Roadster. However, later Elon Musk confirmed on Twitter, stating that the new wipers won’t make it to the production model of Cybertruck.

The other minor design changes include side mirrors, however, Musk stated that customers will be able to remove the side mirrors ultimately. In late October Cybertruck was spotted with side mirrors that were not introduced in the original model that was shown earlier. Also now, there are two headlights instead of one on the front bumper.

On Friday when the electric pickup was spotted, it was seen being driven along the test track several times. As the vehicle stopped several times during the testing process, it was easy for the ones who spotted the vehicle to observe the updated design changes. Elon Musk talked about having both mirrors and wipers, stating that there is no ideal solution for deployable wipers.

Manufacturers have to ship cars with side mirrors by law, but owners are allowed to modify their cars.

The wiper is what troubles me most. No easy solution. Deployable wiper that stows in front trunk would be ideal, but complex.

That is not the production wiper

While the vehicle with windshield wipers may not be a production vehicle, it will be a display model known as “Tesla’s best product ever”. Elon Musk notes this during Wall Street Journal’s CEO Council Summit. Stating, “The Cybertruck is gonna be an incredible product. I think it may be our best product ever. I think it probably will be. It has a lot of new technology, so it’s hard to make. I bet it will be awesome… It will be something really special, like one of those rare products that happen once in a while that are really special,”

The Cybertruck was unveiled back in 2019, and the vehicle is still under development in minor aspects. Initially planned to start production this year, the manufacturing of the electric pickup in the Fermont factory was postponed to 2022. However, now as the website doesn’t show 2022 for pre-ordered customers, more delay is expected. While Tesla is struggling with supply chain pressures, increasing demand, and manufacturing plant completion (in Texas) the Cybertruck developments also seem to be under review.