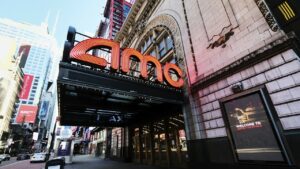 Previously, the firm stated that before the end of the year, it would accept cryptocurrency for online ticket and concession transactions.“Big newsflash!” wrote CEO Adam Aron on Twitter on Thursday night. “As promised, many new ways NOW to pay online at AMC. We proudly now accept drumroll, please Bitcoin, Ethereum, Bitcoin Cash, Litecoin. Also Apple Pay, Google Pay, PayPal. Incredibly, they already account for 14% of our total online transactions! Dogecoin next.”

Aron defended himself earlier this week after selling approximately $25 million of his company’s stock, causing the stock price to plummet. Their average share price was $40.53. Aron wants to sell up to 1.25 million shares of AMC stock in the near future, according to a Tuesday filing with the Securities and Exchange Commission.

After the documents were made public, AMC’s stock dropped more than 4 percent in after-hours trading. Aron did disclose his plans to sell during an August earnings call. He confirmed his plans on Monday’s results call, stating that he “should diversify [his] holdings a bit, especially with Congress debating possibly skyrocketing capital gains tax rates and big changes to what may be passed on to one’s descendants.”On the call, he stated that he revealed his plans in August not because he was compelled to, but because he wanted to be transparent.

He tweeted Wednesday, “62.5 percent of my annual pay is AMC stock, not cash. I hadn’t sold even 1 AMC share in 6 years. I publicly said months ago and again Monday, now at age 67, it’s prudent to diversify assets for estate planning. I Still Have Well Over 2 Million Owned/Granted Amc Shares. I believe in AMC.”

According to a Securities and Exchange Commission report made public on Wednesday, the CEO sold 625,000 shares on Tuesday. With movie behemoths like AMC Theaters accepting Bitcoin as a form of payment, this news adds fuel to the fire that is accelerating the price action of the world’s largest crypto to new highs.