The Bitcoin network has already eclipsed PayPal in terms of volume processed, hitting $489 billion per quarter. According to a recent analysis, three primary conditions could lead to BTC reaching Mastercard-level volumes. If Bitcoin’s price rises to $245,000, the network’s volume will easily surpass Mastercard’s. 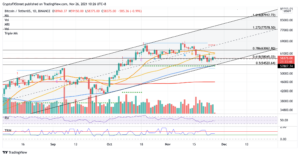 When will Bitcoin overtake Mastercard in terms of ‘value transferred’?

The network has developed enormously since the launch of the main cryptocurrency in 2009, handling billions of dollars in daily transactions.

In 2021, the Bitcoin network is expected to process roughly $489 billion each quarter, surpassing PayPal’s previous record of $302 billion per quarter by $187 billion.

According to a recent estimate by Blockdata, Bitcoin is 27 percent of the way to Mastercard – a firm founded in 1966 – in terms of volume handled, with its network handling $1.8 trillion per quarter. Visa’s network processed $3.2 trillion on average every quarter.

According to Blockdata, if Bitcoin’s value sent each transaction increased by 260 percent, the network would process the same amount as Mastercard. The average transaction value would have to climb by 540 percent to achieve Visa’s volume level.

After falling to lows below $56,000, the bitcoin price has attempted to reclaim some of its lost ground. BTC will most likely face its first hurdle at the 50-day Simple Moving Average (SMA) at $60,601.

While continuing to trend within an upward parallel channel on the daily chart, BTC will most likely face its first obstacle at the 50-day Simple Moving Average (SMA) at $60,601. Because Bitcoin price was able to maintain above the channel’s bottom border, the ruling technical pattern suggests that the bulls may be eyeing the next goal at the topside trend line at above $80,000. However, before BTC may reach the optimistic aim, other resistances may occur.

The 21-day SMA at $61,432 is the next price barrier for Bitcoin. Additional resistance may appear at the 78.6 percent Fibonacci retracement level of $63,062, then at the center boundary of the prevailing chart pattern of $66,365, which coincides with the Momentum Reversal Indicator’s resistance line (MRI).