The saga of Ola started off from way before when people would just stand on roads, with shopping bags in one hand and the other- merely struggling a raise to hire a cab. Before we even begin telling you all about Ola just take a moment to fathom the fact of how easier Ola made lives for us.

Ola has just one simple introduction- The pioneer of  Indian cab aggregator companies. The picture of cab availing services is completely changed by Ola and of course with a better appeal.

Talking about the origin, Ola which is owned by  ANI Technologies Pvt. Ltd., was made available in December 2010. It was launched by two IIT Bombay Graduates with the name OlaCabs. The chief ambition of Ola was to cover the way between cab drivers and commuters which it performs exceptionally well.

When it could simply buy cars and give them out to drivers but it took another turn. Instead, Ola chooses to partner with various cab drivers and car-owners with a little hint of modern technology, and bam the Ola setup is complete!
It solves two purposes at once- it gives commuters the cab, and gets the cab is commuters. Now, this is what you call a real ‘One shot but two targets’! The Ola mobile app allows users to book a cab within seconds and avail them of a ride within seconds. The made in India Ola ride-hailing app has almost 60% market share (as of 2014) in India. The user count of Ola is spread around a massive number of 100 cities with more than 15-Lakh drivers serving the cab riding service.

One might think that it is the fuel that keeps running the Ola cabs, however, Ola is run by a hyper-local approach. It is strong in commitment to its goal of serving a billion people with the feature of easy mobility. To keep up with all its motives and missions, Ola is now also running its services with auto and bike booking options. Ola also knows the Indian roads the best and for the same, it came up with another riding option’ in 2017- a bicycle-sharing service called ‘Ola Pedal’. ‘Ola Pedal’ facilitates the last mile connectivity. Read further to know more about the Saga of Ola.

Talking more about the Saga of Ola, the cab-booking system of India was effectively made easier with the launch of Ola. It was like all the cabs were just a tap away! Ola gives a variety of payment options and also the mention-worthy ‘Ola Play’. Ola Play keeps the passengers entertained on their way. Talk about a safe and comfortable ride? Ola is always there to save your day at a reasonable price.

To keep up with all the possible needs, Ola also operates self-drive cars. At times you want a car to just go on a long drive, Ola will help you with its Self-Drive. The cab-hailing service Ola provides a variety of options of cabs that you can hire on the basis of your needs. From a range of cab options, you can choose any car depending on the number of travelers, budget, and other factors.
With Ola, you can choose between hire shared taxis, autos, bikes, and even e-rickshaws through Ola for a ride within a city.

In case you wish to travel outside your city, you will have options like- Ola Outstations and Ola Rentals. With Ola Outstation, you can travel between two cities with a fixed fare. On the other hand, when you choose Ola Rentals you get a cab that runs on an hourly basis. There is another new service feature of Ola known as ‘Ola Select’. ‘Ola Select’ is a subscription-based membership program that offers premium benefits on rides. ‘Ola pedal’.

Even if this service did not make it in the newspaper headlines, Ola Pedal with its bicycle-sharing service is already a big hit in the IIT Kanpur and the IIT Madras campuses with over 500 cycles.

In the year 2016, Ola also launched another service ‘Ola corporate’. It was executed mainly for organizations and their employees. When employees book their commute with Ola Corporate the cab fare is deducted from the company’s Ola corporate prepaid account. With this, companies can easily know the travel expenses of their employees while also ensuring their safety.

Your eyes might have been sore while reading all that Ola offers but Ola never stops from giving users the best. To ensure the same, Ola also came up with  ‘Ola money’. The facilities that Ola Money offers are-  Ola money credit card, Ola money postpaid, Ola money mobile wallet, and Ola money hospicash.

Ola hospicash is a collaboration between Ola and Religare health insurance that allows the policyholders to claim Rs. 5000 per day in case of hospitalization.

Ola works with straightforwardness. The commission is given to drivers for every ride that they ride. Ola is known to charge very reasonable and very less when compared to other cab services out there. With the obtaining of FoodPanda in December 2017, Ola likewise forayed into the cloud kitchen sector with a success flag-waving.

Ola launched India’s first multimodal electric vehicle project on 26 May 2017-  The task united industry specialists and the Indian government to inaugurate the electric vehicles for the general population and advance shared transportation in Nagpur. Ola is giving 200+ electric vehicles to booking in Nagpur through its application. Set up as a different brand name, Ola Electric Mobility Pvt. Ltd additionally arrived at gold plated status with a $250 million speculation from SoftBank in July 2019.

About the founders who made Saga of Ola a success 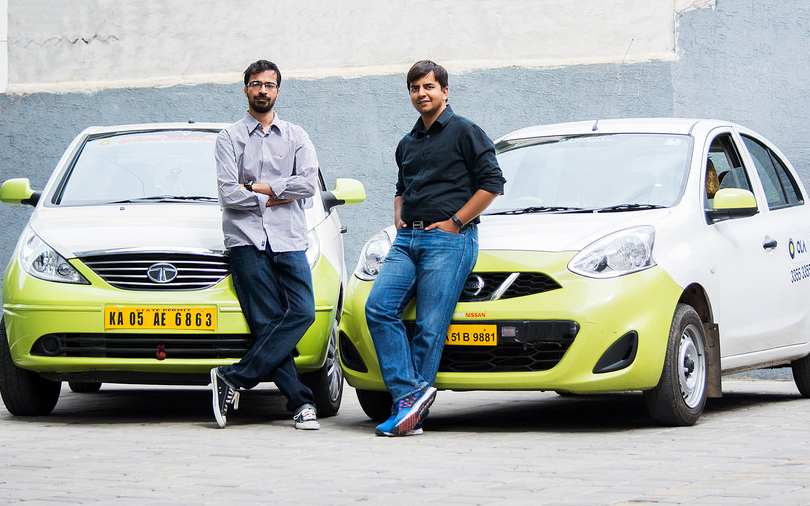 Yet another part in the saga of Ola. The founder of Ola is Bhavish Aggarwal who is an IIT graduate. He completed his  B. Tech in computer science in the year 2008. Before comping up with Ola he worked with  Microsoft research in Bangalore for two years just after finishing college. Talking about his achievements, he filed 2 patents and published 3 research publications in international journals during his work-span at Microsoft. During all of this exceptional work, he always had a dream of an entrepreneurial dream. A long way before Ola was launched he started the success staircase while stepping on an online company to sell short-duration tours and holidays before giving it a face and brand name of Ola Cabs.

Bhavish Aggarwal is now holding the title of CEO of Ola. Born on 28 August 1985, OLA owner Bhavish Aggarwal’s age is just 35! His personal net worth was estimated to be around $350 Million as per 2019 statistics.

The Co-founder of Ola is Ankit Bhati. He leads the technical department of Ola for guaranteeing a fast, helpful, and instinctual experience for the clients and accomplices. He took admission in IIT Bombay in 2004 to pursue B.Tech in Mechanical Engineering and an M.Tech in CAD and automation. Till 2009, he had taken a shot at a few independent ventures, and with new businesses like Wilcom, QED42, and so forth Ankit at long last chose to surrender his traveling proficient life for his start-up program. He turned out to be important for the Ola Cabs journey in November 2010 and contributed chiefly in making the saga of Ola a success story.

The first-gear of Ola

The saga of Ola is no less interesting than the invention of the airplane. Born in Ludhiana, Ola owner Bhavish Aggarwal was just like every other success-driven entrepreneur. Bhavish first started an online site named Olatrip.com that offered holiday packages and weekend trips.

While trying to keep his holiday and tour planning business afloat, Bhavish had to travel from Bangalore to Bandipur for which he rented out a car. The cab experience was horrendous! The driver stopped the car in the middle of the journey and demanded a renegotiation of what Bhavish was paying. After being refused, the driver proceeded to abandon Bhavish en route to his destination.

This is when he realized how his plight was probably similar to a lot of customers across the country who were looking for a quality cab service. Bhavish saw the potential of an extraordinary cab booking service, and he changed Olatrip.com’s business model to the one we know today as Ola Cabs.

Bhavish made his co-founder Ankit Bhati sit in the back seat for taking Ola Cabs forward. Bhavish’s folks disagreed with his startup designs initially. They were altogether disappointed with his choice to turn into a ‘travel agent’. By the by, his folks became steady once OLA got its initially round of blessed messenger venture from Snapdeal author Kunal Bahl, Rehan yar Khan, and Anupam Mittal).

Bhavish accepts that anybody can have a decent business thought yet to execute it effectively, one must have an adaptable model to control the business. As indicated by him, the best or probably the most secure model one can or ought to embrace is maintaining a business while possessing “zero” stock and that’s how the saga of Ola got its kick start. 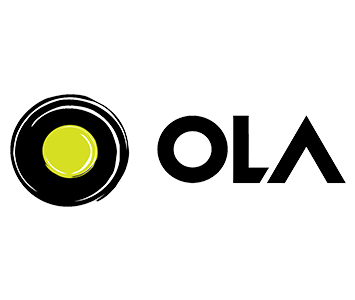 With the name of it, anyone can easily get confused if it is a short form for a bigger name. Ola stands just for Ola. The name is derived from the Spanish word ‘Hola’ that translates to ‘Hello’. The cab service name indicates ease and friendliness just like saying a ‘hello’. Ola’s logo is simple and styled as OLA. The logo also has an “O” which represents a tire.

Ola has a straightforward business model. It goes about as a facilitator to give cab booking services. Clients can book their taxis through the application. Ola doesn’t possess any of the taxis. Just those drivers with legitimate allow appropriately approved and confirmed by transport specialists can join with Ola; they could be either independently employed or work for an administrator who claims different vehicles.

Much the same as how we as clients utilize the Ola application, the drivers gain admittance to a driver-explicit portable application on their cell phone once they register with Ola. This is done simply after an intensive check of legitimacy and leading due persistence of the business papers and the individual papers of both the driver and the administrator. The drivers have the adaptability to choose their own opportunity to sign in to the Ola application and acknowledge demands for rides from clients. They may decide to remain logged out of the app according to their suitability. Ola takes a commission of 15% on a normal on all the bookings done through the Ola mobile app.

The competitors of Ola 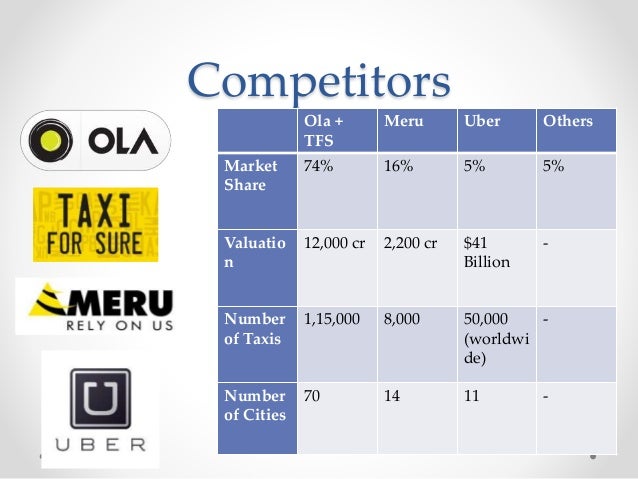 The swordfighter right in front of Ola is none other than Uber- the world’s most well-financed startup having raised more than $24 billion in equity and debt on a recent valuation of $82 billion. Other players in India include Meru Cabs Company Pvt. Ltd. which owns Meru cabs, Carzonrent (India)Pvt. Ltd which owns carzonrent and Zoomcar India Private. Ltd. which owns Zoomcar. In the bike taxi segment, Rapido is slowly capturing Ola’s market share (source- startuptalky.com)