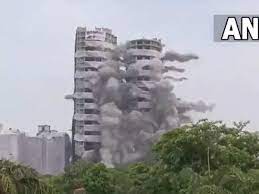 The Twin Towers at Noida Bite The Dust.
Home
News

The Twin Towers at Noida Bite The Dust

Deemed as tallest buildings in the country, the two buildings located at the New Okhla Industrial Development Authority, Uttar Pradesh were dusted to the ground. The demolition of the two buildings was permitted last year by the Highest Court of the Country.

Amongst the other costs, the total cost to demolish the two buildings amounted to Rs. 20 crores. The demolition utilized a total of 3700 kg of explosives. The other costs included a payment of Rs. 175 million paid to Edific Engineering the company responsible for the demolition, the amount returned to the buyers with interests (the cost of each flat was estimated to be Rs. 1 to three crore), costs involved in the purchase of land and construction of the two buildings, the amount paid under the insurance cover, besides other costs involved.

According to news reports the company incurred a loss of around 5000 million. As per the estimates, the two buildings can easily cost over 700 Crore Rupees, the market value of the two towers are further estimated to be near 900 Crores.

We have completed and given delivery of more than 70,000 units to homebuyers and are committed to give delivery to remaining homebuyers as per schedule time frame. We assure all our home buyers that the order of Supreme Court will not affect any other ongoing project and all other projects will continue,” Supertech said in an statement.

One of the main issues which were responsible for the demolition of the two buildings was a revision of the plan to construct the 14 buildings having 9 floors to two towers having 40 stories.

The Supreme Court in its order had said that the construction of the two buildings violated building codes and was seriously illegal. The court also ordered the return of the payment for the cost with an interest of 12%.