Ex-HCL employee’s led ‘TripHobo’ is on mission to become a global brand – a goto place for travel planning!

TripHobo is the largest and fastest growing platform today for creating personalized itineraries. Hundreds of thousands of travelers across the world use TripHobo each month to create their perfect trip plans.

The concept of a trip planner has been there since the last 5-7 years now. There was a wave of social travel planning startups between 2008-2012. Most of them were unsuccessful. Almost all these startups were attempting to do something that the users never wanted. Also, there was the frequency issue. Users didn’t really plan more than 1-2 trips a year. Thus the users needed to get the full experience in their first or second visit. None of these previous startups managed to give users all the possible content that the user could use for planning. The experience was always broke. No matter how cool the UIs were, the users could never really finish making a comprehensive, realistic, trustable trip plan with these startups.

The founders of TripHobo noticed that unfortunately none of the investors of these startups have thought of it this way- To make a trip planning startup successful, you need  the following components:

2) Real time content about all the possible transportation modes between cities and between attractions.

3) Content about all the restaurants that are favored by travelers and also restaurants nearby attractions. This need to come with user reviews.

4) Content about accommodations (hotels, home stays, hostels) across the world

There have been startups like Mygola (now closed) which made an attempt at this but didn’t really succeed at execution.

“The three of us were always passionate about travel and all of us were technologists. When we used to travel on our own, we used a lot of technology and gadgets during our trips. We noticed a lot of gaps in the travel planning processes which could use technology. It was however difficult to scale each of the use cases with differentiation. We worked on a lot of trial and error mechanisms to settle down on a concept that was underserved or improperly served online, which had significant demand and which could be executed in a way that can create significant barriers to entry.”

The travel planning platform of TripHobo.com was born out of these iterations. Today TripHobo is the most successful travel planning platform in the travel space. There have been platforms in the past that had a similar philosophy as of TripHobo but had failed to execute it. The key to TripHobo’s success is that they have been able to execute well!

Praveen has a flair to go on and on endlessly about things he is passionate about, irrespective of who’s listening. He claims he is national integration personified. Rajasthani by descent, Hyderabadi by birth, educated in Lucknow, a Royal Challengers Bangalore – IPL fan, he has traveled the length and breadth of India. His friends say he is over enthusiastic, full of life and a happy-go-lucky chap. He brings to TripHobo (JoGuru) 7 years of rich experience in setting up e-commerce portals for his past organizations. Extremely zealous about traveling and exploring new places, he has occasional backpacking urges and takes off without notice. His 18 day bike trip to Leh, Himalayas being a case in point. He never misses out an opportunity to showcase his travelogues. He loves adventure sports, fast cars and dreams of owning a private island in Maldives. 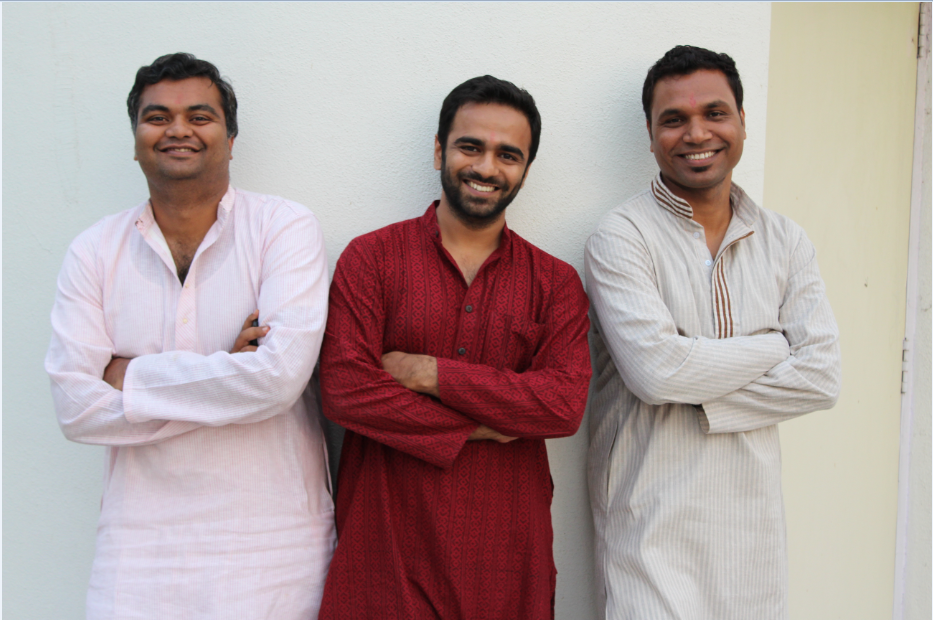 Ever since Saket developed some algorithms at Toshiba and got a patent, he thinks he is a clone of Sheldon from Big Bang Theory, much to the annoyance of everyone around him. He has an uncanny ability to argue about anything under the sun with or without making any sense. He wanted to be a Marathi film star but ended up with a Master’s Degree in Management from MDI, Gurgaon. He has over 7 years of experience in Product Development, Product Management and Business Development across the Globe. Passionate about anything related to technology or travel, he has traveled to more than 20 countries till date and dreams of covering the UN. He loves life, singing, watching movies and is famous for his PJs. Saket is the social media wizard at TripHobo (JoGuru) and manages product and roadmap development.

Karthik is an avid traveler (traveling close to 6 hours daily to and from work!) and loves adventure sports, reading and above all – sleeping. When awake, he constantly dreams of attending every single Formula 1 Grand Prix someday. He speaks with immense confidence about things he has no clue about and mostly manages to get away with it. He lists Sarcasm as his Major, but credits his Master’s degree in Marketing Management from IIM Indore for making him the quintessential salesman. Once Karthik starts talking, the listener almost invariably chooses to agree with him. He brings to TripHobo (JoGuru) over 4 years of experience in Business Development for new products and new markets. He is a gadget freak and an Apple fan and it is recommended to refrain from asking him about it unless you have a couple of hours to spare.

TripHobo is the largest and fastest growing platform today for creating personalized itineraries. Hundreds of thousands of travelers across the world use TripHobo each month to create their perfect trip plans.

Currently, TripHobo is home to one hundred thousand user-created itineraries and curated content for close to 500 top tourist cities worldwide. The content is rich and relevant to help travelers plan. For example, in addition to generic information about the place, TripHobo also adds information like opening and closing times through the year, the best time in a day to visit, the dos and don’ts, ticket prices, travel tips etc.

This data also helps TripHobo in guiding the users while they’re creating the plan and also to recommend the right set of attractions for a traveler.

Every month thousands of itineraries are created and this kind of scale has not been achieved by any other travel planning start up before. In addition to the travel planner platform, TripHobo also provides planning related information for over 50,000 points of interest that aid users in travel planning.

TripHobo has tied up with Skyscanner, a leading, global travel search engine. This partnership will now allow users to compare prices of hotels, flights and car rentals in addition to planning their trips and itineraries on the TripHobo platform.

TripHobo has also tied up with Zomato. This partnership is aimed at enhancing the offerings of TripHobo to holiday planners, as a one stop solution for all their trip requirements. This partnership will allow TripHobo users to access and utilize the extensive database of restaurants on Zomato.com’s network worldwide. The collaboration is unique because it not only offers TripHobo users content and deals on restaurants but also specialized recommendations based on their itinerary.

TripHobo today is world’s largest and fastest growing repository of user-created trip plans. Today users can access more than a lakh of these, view and edit them to customize.

TripHobo has inhouse built technology based on theory of constraints. This technology enables the user to interactively optimize their trip routes when planning their trips. This route optimization method takes into consideration opening and closing times of attractions, preferred times to be at an attraction, travel distances, travel modes etc.

The biggest USP of TripHobo is the large volume of user-generated itineraries that are available for any user to make the most of it. Every time you create or customize an itinerary, it is available to rest of the TripHobo community to see or use. “This kind of user-generated content and sense of helping out and reaching more people is what we believe is needed in the travel planning space.”

There are two distinct personas – one where they love planning their trip till the last detail and the other where they need a quick and easy solution for a short trip. The interesting thing is that both these personas usually reside in one person, depending on their mood. TripHobo addresses both these personas intuitively by providing the travel either an empty canvas to paint their dream trip or choose a quick plan and customize them.

What could presumably be the most alluring feature about TripHobo is the fact that travelers get to choose exactly which sights or attractions they want to see in a city (unlike ‘packaged’ itineraries) and TripHobo will do the rest of the spare work for them.

The Trip So Far!

Praveen, Saket and Karthik calls the journey of TripHobo so far very exciting. There have been many ups and downs. They started out of a small apartment which was about 400 sq ft and 3 people. Today, the team is 70 people in size.

The challenges were similar to any other company starting up. The biggest challenge was to attract talent and manage attrition in the initial days. They knew how important it was to have a right team. The other challenge was to find the right fit. They didn’t want to take risk of hiring the wrong fit and later redo the process. Managing capital was also a challenge and they had to be extremely cautious with the limited money they had. They had outsourced major part of the work to other companies located at different Cities which was not yielding desired results. Juggling a full-time job and a passion to start-up was another. “After we started quitting the mainstream job one after the other, we got a better perspective. Thankfully, our families were always supportive of our idea and we were spared the pressure on the home front.”

They went live with 5 cities. It was difficult to see how users interacted with the product since the traffic was very less at that time. It has taken some time for the product to mature and settle with the users. User feedback was something that they collected almost daily. They still send out feedback requests to their users everyday. Users have taught them a lot. There have been numerous occasions which tested their belief in themselves, the product and their employees. One of the most important learning that they have is “never give up”. Persistence is the key to success. TripHobo is an amazing example of how a product evolves with user inputs.

Today, TripHobo is present in 700+ cities and  has enabled planning for more than 15000 cities worldwide. They have key partnerships with platforms like skyscanner, zomato and many more.

These partnerships have helped TripHobo build some amazing features which users love. TripHobo plans to build similar partnerships in the next few days.

TripHobo scored its first validation when Triphobo managed to raise a funding from Angel investors for USD 450K in late 2012.

TripHobo will be actively looking for funding next year. Currently, they are engaging with investors on case by case basis.

“Our vision is to help users plan memorable trips. In the coming years we hope to become a global brand name and the go-to place for travel planning.”