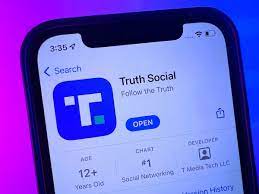 Truth social is yet to find a place on the Google play store after it was formally launched on 20 February this year. According to news reports, the app has been barred because it does not meet the required standards of content moderation. The app reported to be coming from Donald Trump was believed to pose a challenge to big tech firms namely Facebook, Twitter, and Instagram.

The website of Truth Social says that it is a social media app that promotes free conversation across the globe without any bias or ideology. According to reports, the app has many similarities with Twitter. Donald Trump has been banned from using Twitter. The app is currently available on the apple app store. According to an estimate, less than half of smartphones use iPhones.  The absence of an app on the Google Play Store limits the reach of the platform

Truth CEO when asked about when the app is coming live on Play Store has said that it is up to the social media platform to come take the call, and it has been provided with all the required information to proceed with the same. The CEO added that it is unclear why it is taking so long to go live.

According to sources, Truth Social knows about the issue. According to Google, Truth Social is already apprised of its violations. Google has reiterated that the before the app goes live on the play store, it is expected from the firm to come up with an effective system for content moderation.

While the popularity of the app on the Apple App store has been on a downward hill, its download gained momentum after an FBI search of the Trump house. According to reports analysed during the period, Truth Social saw a spike in downloads. The app saw more than 13 thousand downloads each day during the period.

Reports also suggest that the app is also under financial liabilities with RightForge. RightForge provides hosting services. Reports say that Truth Social is yet to pay more than $1.6 million to Right Forge.

The prospects of the app have also been armed by a delay in a merger between Trump Media and Technology Group and Digital World Acquisition Company.