Virtual Reality (VR) is becoming more and more popular in various sectors mainly for the purpose of training and entertainment. This technology has been considered to be extremely useful when it comes to saving resources and capital. It gives its users the opportunity for trial and error. This technology is now slowly proving to be popular amongst the military. The main reason behind this is the opportunity given to the soldiers to carry out various operations without any chances of injuries or human life endangerment.

Making use of this, a military exercise too place at the Marine Corps Base Camp Lejeune, North Carolina. This occurred during the demo of two different Office of Naval Research (ONR). Two sponsored training systems are designed specifically to facilitate training of the Fire Support Marines and Joint Terminal Attack Controllers (JTACs). The name of the systems developed are JTAC Virtual Trainer (JVT) and 3D Warfighter Augmented Reality (WAR).

Timothy Parker, who is currently Fires subject matter expert supporting ONR’s Warfighter Performance Department said that, “When you look at live-fire training, nothing will replace that. Unfortunately, ordnance is very costly; you have to schedule time in advance; and, in the case of air, it becomes extremely expensive when you add up that any hour flown means at least two hours of maintenance.”

He further added that, “When you look at other simulators, there are fixed-location sites that provide great training. But they also require scheduling, a building, a staff. With a system like JVT or 3D WAR, units can train any time and place—within diverse virtual scenarios involving multiple targets.” 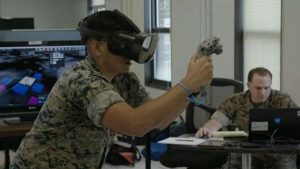 JTAC Virtual Trainer (JVT) is being developed by a tech company called Virbela. It has a video game software in a commercial gaming computer. This system is equipped with features such as virtual reality (VR), a head mounted display which allows the JTACs to give an experience of a fully immersive environment. This in turn gives the user a realistic feel about the entire operation conducted and will be able to affect their decision making ability when it comes to such a situation in real life scenario.

According to Dr Peter Squire who is currently working as a program officer in ONR’s Warfighter Performance Department, “The purpose of developing JVT and 3D WAR is to make training more immersive and engaging. Future training systems need to be easily accessible and useable to Marines—and complement the type of activities they perform during live-fire exercises.”

The 3D Warfighter Augmented Reality (WAR) makes use of augmented reality (AR) technology. This technology enables the Fire Support Marines to see virtual targets as they would appear in the real world such as vehicles and aircrafts. This system comes with an augmented reality (AR) backpack, a head mounted viewing display with goggles, navigation sensors that track location and feed video to the head-mounted display and a handheld tablet.

Colin Sullivan a Lockheed Martin software engineer says, “The advantage of 3D WAR is it allows us to train outdoors in an actual environment using virtual fires. With most other simulations, you’re indoors, you’re limited by screens and you don’t get as much of an immersive experience as being out in an actual field, working as a team.”