Zomato To Promote Akriti Chopra As Co-Founder ahead of IPO 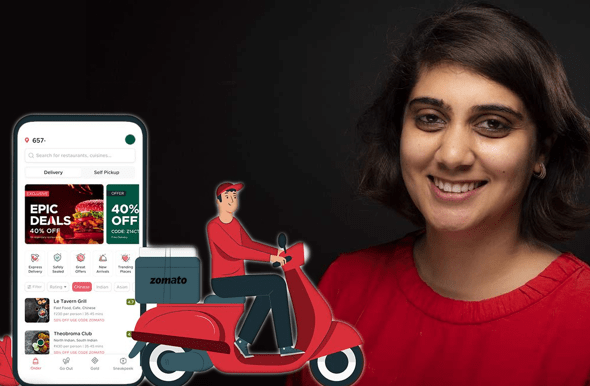 Zomato, the foodtech company is soon going to launch its initial public offering till the month of September. The food delivery company has decided to promote Chief People Officer and former CFO Akriti Chopra as the co-founder of the company post the release of the IPO in September.

A letter was given out as the announcement regarding this where Deepinder Goyal, Founder and CEO of Zomato, along with the other co-founders of the company, said- “She’s mostly been behind the scenes all these years, working hard and building an impeccable finance team. The quality of her work, her work ethic, and the insane ownership of the team she’s built, all shone very brightly over the last few months as we prepared ourselves for the IPO.”

Akriti has been a part of the company since its early years. She started as a senior manager of finance and operations and from there to becoming a co-founder just recently when she handed over her previous post as CFO to Akshant Goyal last year in the month of October when the CFO role started becoming more external facing in the run up to the IPO.

“This was when the CFO role started becoming more of an external-facing role in the run-up to our IPO. Spotting talent, getting out of their way and actually helping them succeed is what Akriti did so super comfortably with Akshant. I only aspire to be able to do this as easily as her when it’s my time to hand over,” said Deepinder further in the mail about Akriti handing her post over to Akshant.

This is not the first time that the food delivery company Zomato has promoted and elevated the CEOs to Co-Founders. The same thing happened with Mohit Gupta when he was elevated from the post of CEO of the company to a Co-founder of the company.

“Tuki (Akriti, I know this doesn’t mean much to you, because you have always been a founder at Zomato. Sometimes more than me, but never less than me. Thank you. Congratulations for now officially being a founder at Zomato,” wrote Deepinder Goyal, further in his email about Akriti and making her a co-founder.

The food delivering company Zomato was founded in the year 2008 by Deepinder Goyal, Pankaj Chaddah and Gunjan Patidar.

Later, in the year 2018, Pankaj Chaddah had to quit the company.

After all these years, the company has changed and now has four co-founders namely- Deepinder Goyal, Gunjan Patidar, Gaurav Gupta, and Mohit Gupta, along with Akriti Chopra, a new member being add to the list, making the company have five co-founders.