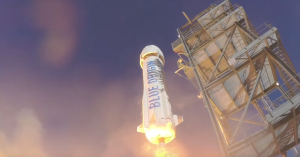 03 April 2016, USA :
The science of space travel is incredibly complex and difficult to master – but the private firm Blue Origin, run by Amazon CEO Jeff Bezos, is making it look easy at the moment. The company has successfully launched and landed its reusable New Shepard rocket for the third time in a row.

The rocket made its way into suborbital space from Blue Origin’s West Texas test center, eventually separating in space, sending its capsule down in a parachute and the rocket to descend to its landing.

“Flawless BE-3 restart and perfect booster landing. CC chutes deployed,” tweeted Bezos after the event (BE-3 is the liquid hydrogen/liquid oxygen rocket engine inside New Shepard). The spacecraft climbed to a height (apogee) of 339,138 feet or 103,369 metres before heading back to Earth.

The New Shepard rocket is capable of carrying six passengers into space, although the tests so far have been unmanned ones – Blue Origin wants to start testing flights with crew members in 2017 before allowing paying passengers on board in 2018.

Space tourism aside, Bezos’ big plan for the company is to get millions of people into space all at once.

“The vision for Blue Origin is pretty simple,” he said. “We want to see millions of people living and working in space, and that’s going to take a long time. It’s a worthwhile goal.”

“It’ll just be an incredibly fun, inspiring part of humanity’s future to go exploring the solar system,” he added. “Who wouldn’t want to do that? Sign me up.”