Chainsaw Drone Might Give You Terrifying Sight Of The Robot Apocalypse 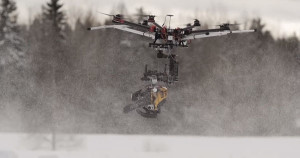 03 April 2016, Finland :
A couple of Finnish farmers went and attached a chainsaw to a drone, and showed off just how scary the robot apocalypse could be. The motive might be not be exactly to scare people, but it sure did.

Perhaps you were unfazed by the recent trouncing of a professional human player by an artificial intelligence in the game of Go. Lee Sedol who holds a 9-dan rank was beaten in four out of five games by Google’s computer program, AlphaGo.

Maybe you think your life will be made easier in this 21st century by the driverless cars that we will all have access to in a few years? Undoubtedly. 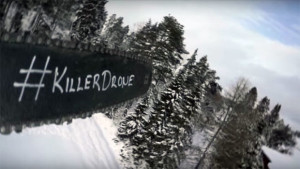 It appears to be practical tree-trimming and icicle-removing applications for this device but the slow motion video of the flying death saw soaring above a frozen wasteland and decapitating unsuspecting snowpeople belies its more sinister purpose, I think.

That all said, and while it’s an utterly terrifying thing to watch, this does show some really practical uses for such a contraption. Taking down branches from tall trees would be a really useful tool for power companies, trying to clear lines, or similar functions.