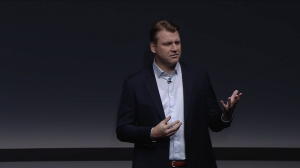 There have been rumours that Apple is set to drop headphone jack in its upcoming iPhones, iPhone 7 and iPhone 7 Plus. Seems, Samsung really believes these rumours. At the launch of its latest flagship phablet (No, that’s not an error, its a smartphone having a screen which is intermediate in size between that of a typical smartphone and a tablet computer) Samsung Galaxy Note 7 in New York City, the company took a dig at Cupertino giant over the speculated ‘miss’.

While on stage describing the new Galaxy Note7, Samsung marketing VP Justin Denison made sure to point out that its new device comes with a headphone jack as can be seen in the video below, “Want to know what else it comes with?” He asked. “An audio jack. I’m just saying,” he added with a smirk as the audience laughed.

Though Denison did not mention ‘Apple’ but it’s clear his headphone jack comments were directed at the Cupertino-based company and its plans to eliminate the 3.5mm headphone jack in future iPhones. Denison also played up the 3,500 mAh battery in the device and its expandable storage, two features that best Apple’s current iPhones.

So with all the speculations, rumours, Apple still is tight-lipped about its latest product!