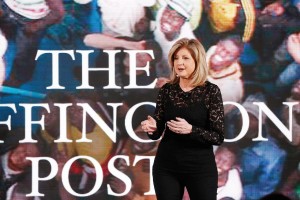 Arianna Huffington is stepping down as Editor-in-Chief of the Huffington Post to focus on a new health and wellness venture.

“I thought HuffPost would be my last act. But I’ve decided to step down as HuffPost’s editor-in-chief to run my new venture, Thrive Global” Huffington tweeted at the same time a Wall Street Journal article announced her departure. “To everyone at HuffPost: it’s you who make HuffPost what it is. I’m filled with gratitude to all the colleagues and friends I’ve made here.”

“The Huffington Post has been working on a next generation strategy over the last few months and the CEO of the Huffington Post, Jared Grusd, will lead the implementation and communication of the plan, which focuses on scaling news and video on an even more global basis,” AOL CEO Tim Armstrong said in a memo to staff.

The Huffington Post is now owned by Verizon Communications Inc., and her departure comes several weeks after Verizon said it was buying the media properties of Yahoo Inc. for about $4.8 billion.